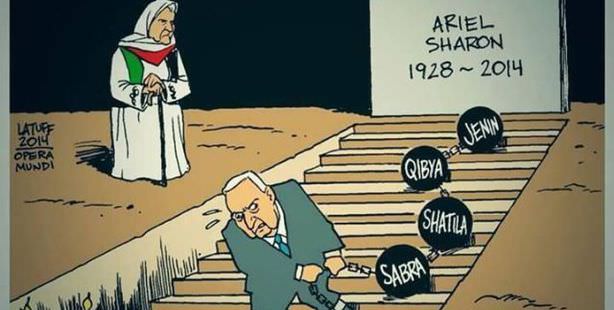 Ariel Sharon, the former Israeli prime minister and a controversial military commander, died yesterday in a hospital after 8 years in coma. He had a tumultuous and long political career in which he allowed almost no progress in the Israel-Palestine conflict.

In 2006, Ariel Sharon had a devastating heart attack from which he never recovered. He spent 8 years in coma at the Sheba Medical Centre near Tel Aviv without ever opening his eyes. A week ago, his doctors issued a statement saying that his days were numbered. Yesterday he died after his last strong heart attack. Israeli Prime Minister Benjamin Netanyahu said Sharon was a great warrior. Palestinian Senior Official Mustafa Barghouti meanwhile said no one should gloat at Sharon's death but noted that the Israeli leader had taken "a path of war and aggression" and had left "no good memories for Palestinians". Joel Beinin, a U.S.-based professor of Middle East history said, "I would like Ariel Sharon to be remembered as an aggressive militarist and Arab-hater who often exceeded his orders".
From the war in 1948 to the disengagement from Gaza strip, Sharon was a prominent political and military figure in the Israeli history. He is considered as a heroic figure and called as 'the lion of God' by many Israelis due to his 'successes', while for Palestinians he was evil incarnate due to his inhumane behaviors in the wars.

"Bulldozer" and "Butcher of Beirut"

Ariel Sharon was a successful military official during the 1967 war after which Palestinian territories including East Jerusalem was occupied and is still controlled by Israel. He has become famous for his intolerance to Palestinian civilians during and after the wars as he launched plans of many new Jewish settlements. He was labeled the 'bulldozer' after he ordered the destruction of Palestinian houses, making thousands of people homeless. In 1982, when Lebanon was invaded by Israeli forces, what Ariel Sharon permitted was unforgivable. In Sabra and Shatilla villages near Beirut, nearly 3,500 Palestinians including many children and women were massacred horrendously in less than 10 hours by Christian Lebanese militias. Sharon was held responsible for looking the other way during the massacres.

Sharon remained an important political figure within Israel, and as the housing minister in the early 1990s he presided over "the biggest building drive in Jewish settlements in the West Bank and Gaza since Israel occupied the territories in 1967," the BBC reports.

Sharon went on to become leader of the opposition Likud Party after current Prime Minister Benjamin Netanyahu's defeat in the 1999 general election. Sharon in 2000 made a provocative visit as the foreign minister to the Temple Mount in East Jerusalem, igniting outrage among Muslims that quickly escalated into the second intifada (uprising). "In the Arab world and among Palestinians, he'll never be forgotten for his callous attitude toward dispossessed Palestinians and his hardline, uncompromising attitude in peace talks," said Ottaway. Jump to 2002, the year after Sharon took the helm as prime minister after a landslide electoral victory over Ehud Barak, and Israel had begun the construction of a barrier in the West Bank. His election pledge was to achieve "security and true peace." His controversial visit to Masjid Al Aqsa triggered nationalist feelings among Israelis and paved the way for his elections as the prime minister. He fell into coma after a heart attack in 2006, at the pinnacle of his career in Israeli politics.