The US and Russia offered localized ceasefire in Syria 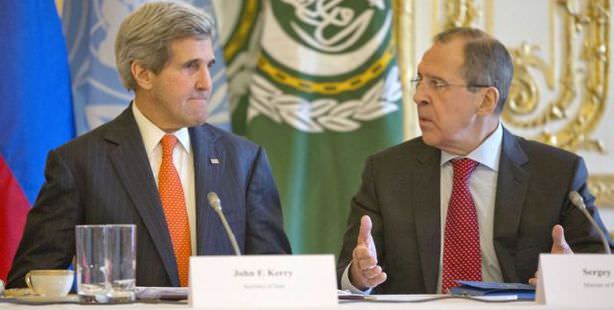 The US Secretary of State John Kerry and his Russian counterpart Sergei Lavrov yesterday called for "localized ceasefires" in Syria ahead of the Geneva Conference.

At the end of the intensive two-day meetings in Paris, the US backing the moderate rebels and Russia, a strong supporter of the Damascus regime made a decision to encourage ceasefire between the rebels and the regime troops in certain provinces of Syria ahead of peace talks that will be held in Geneva on 22 Jan. The two top diplomats also said that it is considered to open the ways for humanitarian aid and prisoner exchange between the warring sides. Kerry said, "Today we discussed the possibility of trying to encourage a ceasefire, maybe a localized ceasefire beginning with Aleppo (north of Syria)." Lavrov added, "What can be done before the beginning of the conference should be done. We are going to try to send signals to all the Syrian sides on the need for the establishment of a localized ceasefire." The moderate, and according to the US, the only legitimate rebel group Free Syrian Army is ready for ceasefire, said Kerry. In response, Lavrov said that the Syrian regime will consider the ceasefire offer.

The head of Arab League envoy Lakhdar Brahimi, who also participated in the meetings, said that Iran must attend the forthcoming peace talks as a regional actor. Iran's Foreign Minister Javad Zarif who visited Lebanon recently and is due to travel to Damascus will be in Moscow for talks with Russian President Vladimir Putin on Iran's nuclear program and on regional issues including Syria. Zarif previously stated that Iran, a key ally of the Al Assad regime will attend the peace meetings.

Despite the disputes among the countries, the Islamic State of Iraq and Levant (ISIL) was raised as the common concern in Paris talks. After Lavrov denounced the existence of non-Syrian and Al Qaeda elements fighting in Syria, Kerry agreed with his counterpart. In the ongoing rebel on rebel fight, ISIL executed many prisoners who were members of different rebel groups, according to a Reuters report. Up to 100 rebel fighters from the Nusra Front, another Al Qaeda-linked group, and Ahrar al-Sham brigade were executed after being captured by ISIL in the town of Tel Abiad, a town on Turkey's border, Reuters quoted activists as saying. According to opposition sources, Nusra Front's commander for the Raqqa province, Abu Saad al-Hadram was among the militants killed over the weekend.

Furthermore, activists said that ISIL gained almost 90% of control over the Raqqa province in North Syria, despite being driven back in other provinces by the other rebel groups. ISIL was able to recapture much of its stronghold in Raqqa through its attack. They also regained control over Tel Abiad, over the weekend. In the last two weeks, more than 700 people were killed during the infight.

More than 90 people, including 9 children and 15 women were killed in different provinces in the fire shelling by the Syrian regime.