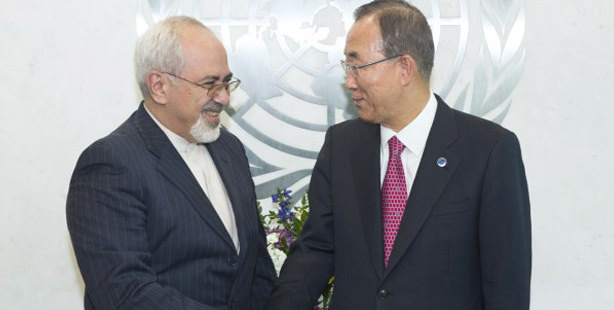 UN Secretary-General Ban said on Sunday that Iran has accepted a plan to establish a transitional government.

The United Nations has formally invited Iran to join the upcoming peace talks, scheduled to open Wednesday in Montreaux, Switzerland.

Ban said Iran needs to be a part of the solution in Syria, and that Foreign Minister Zarif assured him that Tehran understands the basis of the talks.

"Foreign Minister Zarif and I agreed that the goal of the negotiations is to establish by mutual consent a transitional governing body with full objective powers. It was on that basis that Foreign Minister Zarif pledged that Iran would play a positive and constructive role in Montreux," Ban said

He said the other nation's presence would be an important show of solidarity.

Iran has long rejected the establishment of a transitional authority as it would likely exclude Syrian President and major Iranian ally, Bashar Assad.

The main opposition Syrian National Coalition does not want Iran to take part in the talks. It said on its Twitter account that it would withdraw from the talks unless Ban withdraws Iran's invitation.

A total of 40 countries have been invited to the first session of the Geneva II conference scheduled for January 22. The second session will be held in Geneva between the Syrian opposition and the Syrian regime and chaired by UN Arab League Special Envoy Lakhdar Brahimi.