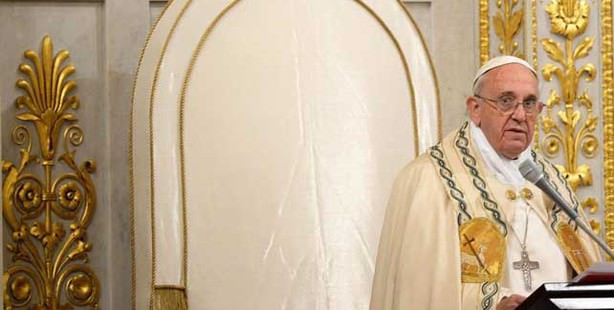 Pope Francis has denied that he supports Marxism, after he came under fire recently for decrying “unfettered capitalism” in a sermon last November.

Speaking to the Italian daily La Stampa, Pope Francis said, "The Marxist ideology is wrong," adding, "But I have met many Marxists in my life who are good people."

The Pope explained that his remarks regarding capitalism were no different to the social doctrine of the Catholic Church, referring to views and theories that assume economic growth encouraged by a free market will lead to greater justice and social inclusion. "But what happens instead is that when the glass is full, nothing ever comes out for the poor," he said. The Pope emphasized that this is the Church's doctrine and should not be regarded as a Marxist view.

Referring to the relationship between the Catholic Church and politics, Pope Francis said, "[It] needs to be parallel and convergent at the same time. Parallel because each of us has his or her own path to take and his or her different tasks. Convergent only in helping others."

In his November sermon, the Pope stated, "As long as the problems of the poor are not radically resolved by rejecting the absolute autonomy of markets and financial speculation and by attacking the structural causes of inequality, no solution will be found for the world's problems." He added that today's economy of "exclusion and inequality, kills".

Pope Francis has been a fierce critic of capitalism since his election in 2013. In a message to participants of the annual World Economic Forum in Davos, he urged the rich to promote prosperity for others. "I ask you to ensure that humanity is served by wealth and not ruled by it. The growth of equality calls for decisions, mechanisms and processes directed to a better distribution of wealth, the creation of sources of employment and an integral promotion of the poor which goes beyond a simple welfare mentality," the message read.