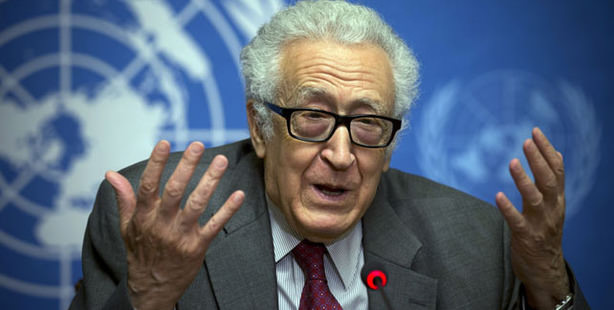 Peace talks between the Syrian regime and opposition forces are due to resume on Tuesday in Geneva, yet there is still no agreement as to the structure of a potential transitional government.

Syrian government officials and opposition representatives continued talks at a U-shaped table, yet they refrained from making eye contact. Both parties worked towards an agreement to allow for a United Nations humanitarian aid convoy to access the besieged city of Homs and for civilians—women and children initially—to be evacuated. Homs has been under siege for almost 600 days.

The fıfth day of talks focused on the transitional period and Assad's future. The regime envoy refused to reach a common point on the matter but insisted that Assad remain in power and be able to run for president in 2014 elections. U.N.-Arab League mediator Lakhdar Brahimi opened the morning session with a review of the principles of the Geneva Communique of June 2012, a broad and ambiguous proposal endorsed by Western powers and Russia as a basis for negotiations.

Assad's role in a future transitional government was a red line during previous negotiations and the point was left vague. The US and Russia disagreed about Assad's role, but signed the communique anyway. The focus on Homs and the release of detainees is meant to act as a confidence building measure. A tentative agreement was reached in Geneva last weekend for the evacuation of women and children from Homs before aid convoys enter the city.