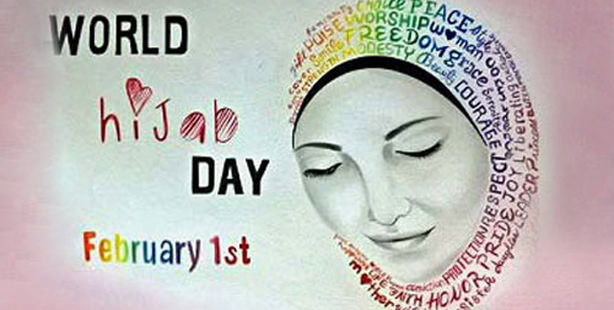 World Hijab Day (WHD) is an annual social network movement founded by Nazma Khan. Non-hijabi Muslim and non-Muslim women are invited to experience the hijab for a day.

"My name is Ela. I am 17 years old. I am not Muslim, but my friend told me about her friend who was discriminated for wearing a hijab. So I decided to experience the discrimination first-hand, to get a better understanding of what Muslim women go through. My friend and I pinned the scarves around our heads and went to the mall. Generally, vendors try to get us to make purchases and ask us to sample a snack. Clerks usually ask if we need help, tell us about sales and smile at us. Not today. People, including vendors, clerks, and other shoppers, would not look at us. They avoided talking to us. They acted like we didn't exist. They didn't want to be caught staring at us, so they didn't look at all." says Ela, a participant of the World Hijab Day.

World Hijab Day (WHD) is an annual social network movement founded by Nazma Khan. It takes place on Feb. 1 every year. The idea emerged with the motto, "Don't judge me until you walk in my shoes!" as a means to foster religious tolerance and understanding. Non-hijabi Muslim and non-Muslim women are invited to experience the hijab for a day.

Nazma Khan, a New York woman, faced the difficulties of wearing hijab when she came to the U.S. from Bangladesh at the age of 11. She was the only hijabi (a woman who wears the hijab, a scarf to cover her hair based on the Islamic faith) at her school.

"Growing up in the Bronx, in NYC, I experienced a great deal of discrimination due to my hijab," she reflects. "At secondary school, I was 'Batman' or 'ninja'. When I got into university after 9/11, I was called 'Osama bin Laden' or 'terrorist'. It was awful. I figured the only way to end discrimination is if we ask our fellow sisters to experience hijab themselves."

Nazma Khan started the movement on social networking sites only, but the idea attracted masses of women worldwide. Women volunteer from over 67 different countries, including the UK, Australia and India among many others. This year marks the second WHD.

With a large number of participants from different age groups and faiths and professions, non-Muslim women were glad to participate in the organization.

Diana Austin said WHD honored women, full-time hijabis around the world. According to Little Presson, WHD inspired her to wear hijab on a more frequent basis.

"My cousin Shakiar affiliates herself with no faith, but she is still spiritual. She faced some ridicule at work today while wearing the hijab, but she explained its importance and never once considered to take it off!" Fareedad R Al Shamari said.

Kayla Overton decided to don the hijab when she went to pick her daughter up from school. When her daughter saw her, she instantly wanted one for herself.

Jennifer Garrett, who participated in WHD as a gift for her Muslim friend, said that by covering, one gains a sense of control. "You are the one who decides who can see you and how much they can see. It's so feministic," she exclaimed.

There were also other participants who defined the hijab as liberating.
"I found it quite comfortable. I am still confused why some people seem to equate hijab with oppression. On the contrary, it was liberating not having to constantly worry about my hair," Tia Stone Jaa said.
Honor Rodriguez was another delighted participant of WHD. She believes that modesty can make people feel great about themselves.

Anyone who has experienced a loss in their life has empathy for those who have experienced loss. Hence, Nazma Khan, the brainchild of this event had the pleasure of presenting the World Hijab Day to holocaust survivors at the Kupferberg Holocaust Center, where she felt utterly loved and welcome.
"World Hijab Day has shown my students a most powerful lesson in accepting individual differences," said Dr. Arthur Flug, the executive director of the Kupferberg Holocaust Center.

All in all, the world will be a more peaceful place when people are no longer discriminated for what they wear. Peace begins with understanding and understanding begins with identifying oneself with another person: in a word, empathy. Nazma Khan took a step in the right direction by calling everyone to develop empathy so that they can better understand the hijab and its wearers. It makes sense when it is considered that there are so many people who have the courage to empathize, yet what about the rest who insist on hate crimes? "Evil is knowing better, but willingly doing worse," says Philip Zimbardo, which is unfortunately true.