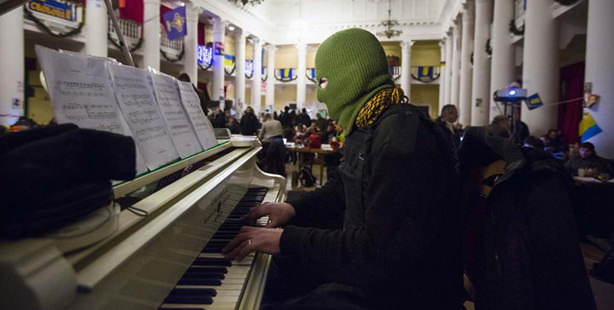 Masked men in combat gear have become a feature of the anti-government protest camp that has taken over central Kiev, but one stands out for his weapon of choice —the piano.

For the Pianist-Extremist, whose impromptu performances on the frozen street outside City Hall have delighted fellow demonstrators, the paramilitary costume, like his stage name, is an ironic barb aimed at Ukrainian authorities who condemn those demanding closer ties with Europe as dangerous militants.

"They call us extremists and criminals, but this is not the case. People are here for patriotism, not for money or violence," the mystery maestro told on Saturday, politely declining to reveal the face beneath the ski mask.

With the protests now in their third month since President Viktor Yanukovich spurned an EU trade deal in favour of a deal with Ukraine's old master Moscow, his music makes a pleasant change to the banging of oil drums that has been the soundtrack of the movement around the square known as Maidan.

"The music helps people and strengthens their morale," the anonymous virtuoso said as he picked out a piece by contemporary Italian composer Ludovico Einaudi on a battered old piano painted in the national colours of blue and yellow.

Violence this month, in which at least six people have died, has been accompanied by the emergence of groups of masked men, many carrying staves and clubs, who say they are providing security for demonstrators against attacks by riot police.

"My music shows that the people here are normal, educated people," said the pianist, who would say only that he studied at a music college in western Ukraine and was now in his 20s.

"We want a better, European future for Ukraine," he added, brown eyes the only part of his face visible under the green woollen balaclava helmet he wore above black fatigues.

"I want to show the people of Europe what is happening in Ukraine," he said. "The authorities here are criminals, and we will see them punished."