Libya destroyed chemical weapons left over from the Qaddafi regime 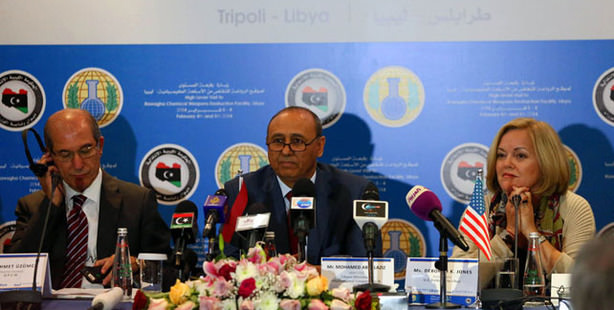 "Libya has become totally free of usable chemical weapons that might present a potential threat to the security of the local communities, the environment and the neighboring areas," said Abdelaziz.

Ahmet Üzümcü, Turkish Director General of the Organization for the Prohibition of Chemical Weapons (O.P.C.W.) visited the site in Ruwagha where the weapons were destroyed. Üzümcü compared the Libyan success to Syria's program for destroying its chemicals and cited Libya as a "good example of international co-operation now emulated in Syria on a larger scale."

While saying there were "some residuals, remaining in Libya, "I believe this is a significant milestone on the road to Libya becoming entirely free of chemical weapons," emphasized Üzümcü.

According to the agreement signed with O.P.C.W., Libya was to destroy the category two weapons by December 2016. The destruction process was carried out by Libyans who were specially trained and technical support from the United States, Germany and Canada.

In 2004 Muammar al-Qaddafi announced that the country had 25 tons of sulphur mustard and several thousands of unfilled aerial bombs for use. He later announced that he was going to destroy some of the chemicals, including weapons of massive destruction, in order to improve relations with the West. He destroyed some of the chemical weapons, as the civil war broke out in 2011, 55 percent of weaponry was destroyed.

Libya's current government is struggling to bring stability and security in the wake of the civil war that uprooted the dictatorial regime of Qaddafi. The neutralization of the vast deposits of chemical weapons complied during the 40-year Qaddafi regime is one of the step to build trust and faith in a public that is hostile and divided under the defacto rule of various tribal militias.