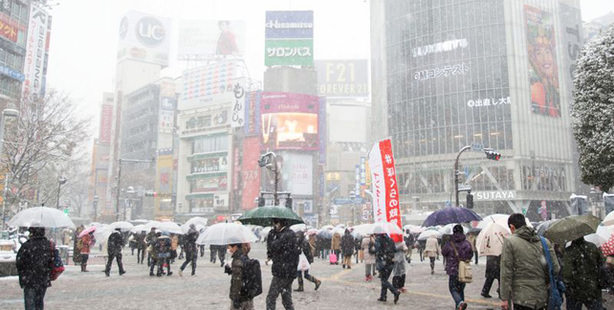 As much as 38 centimeters of snow covered parts of northern Japan, leaving at least 11 people dead and over 1,000 injured.

The capital, Tokyo, whose climate is similar to the southeastern United States where heavy snow is rare, was hit with more than ten inches of snow, the city's heaviest in 45 years. The Tokyo Electric Power Company said more than 20,000 households in the Ibaraki and Chiba prefectures were without power.

Tokyo averages only 4.3 inches of snow each year. The last time Tokyo saw over eight inches of snow was Feb. 12, 1994, according to Weather.com. The Japan Meteorological Agency issued a heavy snowfall warning for the first time in 13 years, warning of winds reaching speeds of 50 mph (80 km/h) during the storm.

The record-breaking whiteout left around 5,000 travelers stranded at local airports, with over 200 domestic flights cancelled. Numerous other people fought harsh road conditions and struggled to get home. Trains were also disrupted in Tokyo.

Meteorologists are expecting weather conditions to worsen Sunday, with more snow fall, high waves and stronger winds in the forecast.