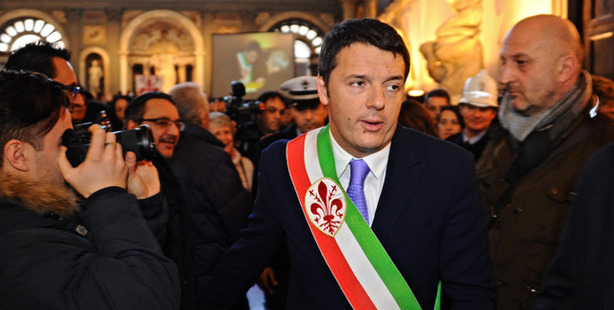 Matteo Renzi was set to be nominated as Italy's youngest prime minister in a matter of days after a party coup forced Enrico Letta to resign as PM of the euro zone state struggling to pull out of recession.
Letta bowed out on Friday after his Democratic Party (PD) forced him to step aside and make way for Renzi, 39, who is promising bold economic reforms and a government that can survive until 2018.
President Giorgio Napolitano was likely to ask Renzi, the current mayor of Florence, to put together a government plan on Monday, acording to a PD source.
The president completed consultations with parties on Saturday evening without announcing his preferred candidate.
"It was an interesting and richly stimulating day in which I received many suggestions that I must pass on to the person who I ask to form a government," Napolitano told reporters after a full day of talks.
Renzi, whose PD is the largest party in parliament, would become the youngest leader in Italy's 163-year history as a united country.
Before he can stake his claim on history and attempt to install Italy's 65th government since World War Two, he must overcome institutional rituals and much political wheeling-and-dealing, a process likely to take several days.
After reaching a deal with parliamentary allies, Renzi must name the members of his cabinet, swear them in and then seek confidence votes in both houses of parliament.
He would become the third prime minister in a row nominated by Napolitano without having won an election. Letta was chosen to helm a right-left government after last year's deadlocked election, and Mario Monti took over for Berlusconi during a burgeoning euro zone debt crisis in 2011.
"If they think that this is democracy, we don't agree," said Vito Crimi, a leading member of the 5-Star Movement in the Senate.
Financial markets have seemed indifferent to Italy's latest political ruction and investor confidence in the country's ability pay off its debt is much improved from 2011.
On Friday, Moody's Investors Service lifted the country's sovereign rating outlook to stable from negative, after having slashed it by six notches to Baa2 from Aa2 during the debt crisis.
But that will not make the challenges facing Italy's next government any less significant. Gross domestic product has shriveled by about 7 percent in the last five years and industrial output has fallen by 25 percent.
Italy's economy grew by a measly 0.1 percent in the fourth quarter of last year, data showed on Friday. It entered its worst post-war recession in mid-2011.
Hundreds of thousands of companies have gone out of business and joblessness has reached high levels not seen since the 1970s. Italy's 2 trillion euros of public debt are equivalent to more than 130 percent of total economic output.
Until two weeks ago, Renzi repeatedly said that he had no ambition to snatch power without first winning an election. Polls say most Italians want new prime ministers to emerge from elections, not from party politics inside parliament.
Mounting pressure from unions and Italy's business lobby, which criticized the Letta government for not doing enough to help the country's struggling corporate landscape, prompted Renzi to change his mind, sources close to him have said.
A similar center-left putsch in 1998 paved the way for a landslide center-right election victory by Berlusconi less than three years later.
"If the new prime minister wants to govern and change the country, he'll have to do it without fear of losing the next elections," former premier Monti said in an interview with Il Foglio newspaper on Saturday.
Italian prime ministers are appointed by the president and confirmed by parliament, so they can be switched without an election taking place. The succession of prime ministers who have taken office without a mandate from the voters has drawn criticism from opposition parties.