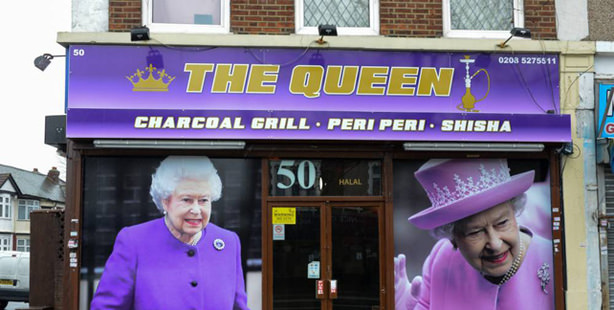 A kebab shop in London covered with royal pictures

Owner of a kebab shop in London took his admiration of the British monarch one step further by adorning the façade of his shop with Her Majesty's pictures and renaming the shop The Queen.

Smiling photos of Queen Elizabeth II in two large display windows are accompanied by a sign above them reading "Charcoal grill, peri-peri and shisha."

A spokeswoman for Buckingham Palace told British media that the royal family's images "should not be used for commercial endorsement as a general rule" however she did not remark whether a lawsuit will be filed against shop's owner Hussein Ibrahim.

Ibrahim's Petra Restaurant was transformed into The Queen early February. In his interviews to the British media, Ibrahim said the changes in his kebab shop were merely "to honor Her Majesty."

He said the pictures did not mock Queen's image and invited the monarch to his restaurant in east London. He now plans to adorn the place's interior with more images of Queen Elizabeth II.