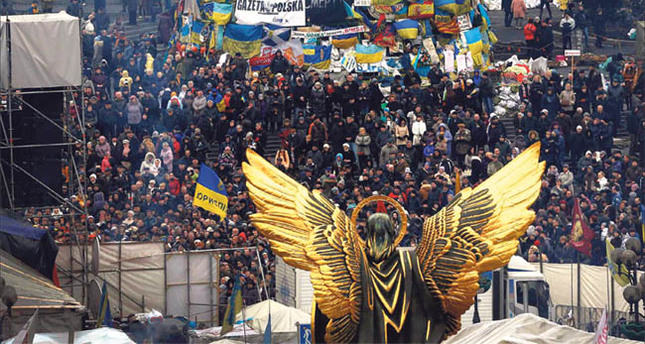 Ukranian President Viktor Yanukovych fled Kiev for the country's Russian-speaking east on Saturday after days of
violent protests that left at least 80 dead and 577 injured. "They are trying to scare me," said Yanukovych. "I have no intention to leave the country. I am not going to resign. I'm the legitimately elected president."

Despite vowing to remain in office, it was apparent Yanukovych had lost control. Riot police disappeared from the city and protesters took control of security, setting up checkpoints. The Ministry of Interior quickly announced it had sided with the protestors. The parliament voted to remove the president from office and on Monday appointed Parliamentary Speaker Oleksandar Turchynov interim president.

Yanukovych denounced what he called a coup: "Everything that is happening today is, to a greater degree, vandalism and banditry and a coup d'état," he said. "I will do everything to protect my country from breakup, to stop bloodshed." Protesters were at once exuberant and shocked at the quick turn of events that occurred a day after Yanukovych and opposition leaders appeared to have agreed to a transitional government, a new constitution, and presidential elections by the end of the year. The agreement failed to clear protesters from the street that were skeptical of the president's intentions and believed he would use the 10-month interval until presidential elections to strengthen his position and further quash opposition.

After Yanukovych fled, demonstrators converged on the president's former personal compound, Instagramming, tweeting, and Facebooking photos of its opulence. They found a golf course, car park with numerous expensive cars, a karaoke machine, zoo, private restaurant in a moored pirate ship and several large residences. Journalists also found documents thrown into the compound's lake.
Many were disgusted by Yanukovych's extravagant taste and the seeming wastefulness of his compound, a stark comparison to the average Ukrainian lifestyle in the current economic crisis. Parliament also voted to release Yanukovych's political rival, former Prime Minister Yulia Tymoshenko, from prison. She was sentenced to seven years after negotiating with Russia in 2009 over the price of natural gas.

Both her supporters in Ukraine and international observers considered the charges politically motivated. Addressing the crowd at Independence Square in a wheelchair, Tymoshenko said, "You are heroes, you are the best thing in Ukraine." The former prime minister vowed to run in the upcoming presidential election, scheduled for May 2014. Kiev turned into a war zone last week with images of bloodied protesters, government snipers, bullet-riddled bodies and buildings aflame. Confrontation between protesters and the president erupted after Yanukovych, under pressure from Russia, declined to sign political and trade agreements with the European Union. Russia then gave Ukraine and its pro-Kremlin president a $15 billion bailout in the form of Eurobonds. The assistance was needed to pay crippling debts to the International Monetary Fund (IMF) and payments to Russia's state-owned gas company.

The former satellite state, which fought for decades to rid itself of its Soviet overlords, found itself in a situation reminiscent of the Cold War. Ukraine, while divided between pro-European and pro-Russian camps, has largely been moving closer to Europe culturally and economically since the fall of the Soviet Union. This angered Russia, which considers Ukraine a "Little Russia" and contends that the two countries should never have separated. Russia also lays claim to Ukraine because of demographics — around a quarter of Ukraine is either 50 percent or 100 percent ethnically Russian.

With a population of 45 million people and an economy worth $136 billion, the central European country is an important market for Russia and the European Union. It is also produces steel and agricultural products, both of which are important inputs for Russia.

Perhaps most important is Ukraine's location. The Ukrainian city of Sevastopol houses Russia's Black Sea fleet, its only access to a warm water port. The country is also located in an energy transit corridor. The European Union imports approximately 25 percent of its natural gas from Russia, 80 percent of which travels through Ukraine. Other smaller pipelines run though Belarus and Turkey. The significance of Ukraine as a natural gas corridor was highlighted in 2009 when Russia cut off all energy exports to Europe through Ukraine after the two countries were unable to agree upon prices and transit fees, leaving tens of thousands of Europeans without heat in the cold month of January.

Europe-aligned Ukrainians saw reneging on the agreements with the EU as a move toward bringing Ukraine back under the control of
Moscow. Protests broke out and the central government effectively lost control of western provinces with closer ties to Europe.
"The unshakable principle guiding events must be that the people of Ukraine determine their own future," the White House said in a statement.

Russia was expectedly less positive in its assessment of the turn of events and said those who reneged on the transition agreement followed "the lead of armed extremists and pogromists, whose actions pose a direct threat to Ukraine's sovereignty and constitutional order." Turkey initially welcomed the breakthrough agreement between the opposition and the government, and called all parties to act with restraint and self-possession. A statement from the Turkish Ministry of Foreign Affairs read, "Turkey will continue to support all political solution efforts made within a democratic context in its neighbor and strategic partner Ukraine and to be in solidarity with the friendly people of Ukraine."
Last Update: Feb 25, 2014 12:25 am
RELATED TOPICS