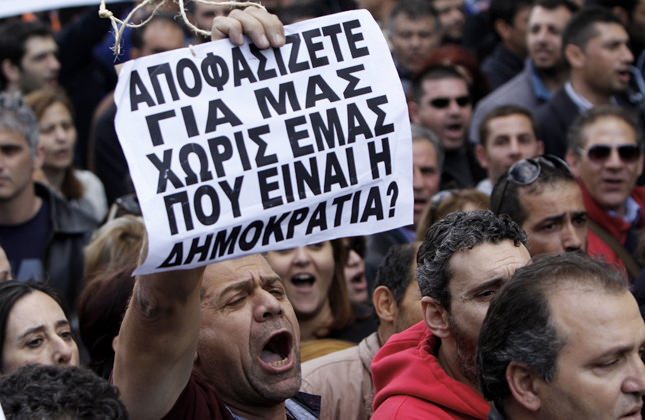 NICOSIA (AFP) - Southern Cyprus Leader Nicos Anastasiades will unveil a new cabinet line-up in mid-March after a walkout by his coalition partner over resumed reunification talks with the Turkish Republic of Northern Cyprus, his spokesman said Friday.

All 11 cabinet ministers tendered their resignations on Friday to give the conservative leader leeway to carry out a wider reshuffle but he asked them to remain at their posts until at least March 15.

The centre-right DIKO party announced early Thursday that it was pulling out of the coalition in protest at what it said were excessive Greek Cypriot concessions in a February 11 joint statement which relaunched UN-backed talks on ending the island's four-decade division.

"At an emergency meeting of the cabinet, the entire cabinet has today (Friday) tendered their resignations to the Anastasiades because of developments since the decision of the Democratic Party (DIKO)," government spokesman Christos Stylianides told reporters.

"Anastasiades asked ministers to stay at their posts until at least March 15 because he has pending overseas engagements," he added.
DIKO held four cabinet posts -- defence, energy, education and health -- which are all now vacant.

Party leader Nicos Papadopoulos is the son of late leader Tassos Papadopoulos, who tearfully urged Greek Cypriots to vote a "resounding no" in a 2004 referendum on a UN reunification blueprint for the Mediterranean island.

An overwhelming 75 percent of Greek Cypriots heeded his appeal, meaning a divided Cyprus entered the European Union a week later, despite Turkish Cypriots voting "yes" to the UN plan.

The coalition split comes a year after Anastasiades came to power in February 2013 on a platform of agreeing a bailout with lenders to save the eurozone country from financial ruin.

He has now turned his attention to the peace talks with the Turkish Republic of Northern Cyprus after winning praise from international lenders for putting debt-ridden Cyprus back on track.

The international community has welcomed the new peace initiative, with greater input from Washington seen as enabling a breakthrough after two years of stalemate.

On Thursday, a Greek Cypriot negotiator held talks in Turkey while his Turkish Republic of Northern Cyprus counterpart met officials in Greece -- the first time that has happened in five decades of UN-backed reconciliation efforts.

The island has been divided on ethnic lines since Turkish troops occupied its northern third in 1974 in response to an Athens-engineered coup aimed at uniting it with Greece.