Russian warships pass through the Bosphorus 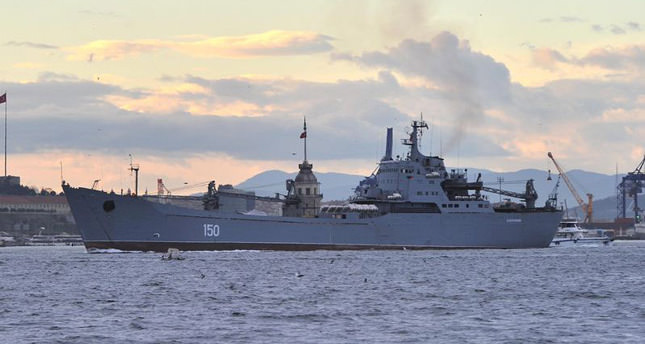 Two Russian warships cross the Bosphorus en route to a Black Sea fleet, a Ukrainian ship is to be entering the Marmara Sea through the Dardanelles

No coast guard boats were seen escorting the ships.

Russia summoned the two warships to its Black Sea fleet after it started to strengthen its military presence in the Crimea.

Meanwhile, an Ukrainian vessel, 'Hetman Sahaidachny,' crossed the Dardanelles, a narrow strait in northwestern Turkey connecting the Aegean Sea to the Sea of Marmara.

Two coast guard boats were reported by AA to be escorting the ship.

The Ukrainian ship is also expected to enter the Black Sea through the Bosphorus.

Thousands of Russian troops have been deployed to the Crimea, an autonomous region of Ukraine, after Russia's Parliament passed a motion on Saturday.