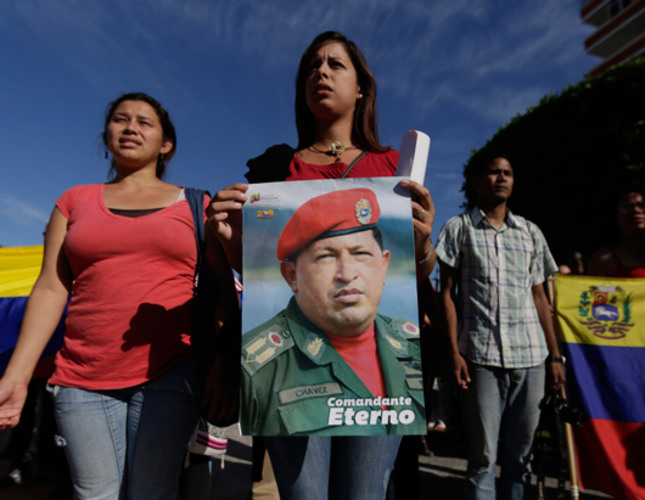 Supporters of the late Venezuelan leader Hugo Chavez took to the streets yesterday to mark the anniversary of his death, a sad but welcome distraction for his successor, who has faced a month of violent protests

Caracas (Reuters) - A year after Chavez succumbed to cancer, his self-proclaimed "son", President Nicolas Maduro, faces the biggest challenge to his rule from an explosion of antigovernment demonstrations that have led to clashes with security forces and 18 deaths.
Wednesday's military parade and other events to honor 'El Comandante' were a chance for Maduro, 51, to reclaim the streets and show opponents that he too can mobilize. "This anniversary is enormously sad.

There's not a single day I don't remember Hugo," Chavez's cousin, Guillermo Frias, 60, said from Los Rastrojos village in rural Barinas state, where the pair used to play baseball in the street as kids. "He changed Venezuela forever, and we cannot go back. Maduro also is a poor man, like us. He's handling things fine. Perhaps he just needs a stronger hand," he told Reuters. Tens of thousands of redclad 'Chavistas' were gathering for rallies in Caracas and elsewhere in honor of the socialist whose 14-year rule won him the adoration of many of Venezuela's poorest, while alienating the middle and upper classes.

Maduro will preside over a parade in the capital before going to the hilltop military museum where Chavez led a 1992 coup attempt that launched his political career, and where his remains have been laid to rest in a marble sarcophagus."Chavez passed into history as the man who revived Bolivar," said Maduro, who often hails Chavez as South America's second "liberator" after independence hero Simon Bolivar. Chavez's own humble roots, anti-U.S. rhetoric, network of grassroots political organizations and lavish spending on slum projects made him a hero for many. Yet his often tough line against opponents, some of whom ended up in exile or jail, his sweeping nationalizations, and his rigid economic policies such as price and currency controls angered many others.

One year after his death, though, debate in Venezuela is no longer about Chavez, but his would-be heir Maduro. The former bus driver and union activist lacks Chavez's charisma and personal grip on the ruling Socialist Party, and has been unable to fix Venezuela's many problems, ranging from soaring prices, to deteriorating services, and runaway crime.Yet 'Chavistas' largely remain loyal to their hero's dying wish that they support Maduro. So far, the protests have not spread far from a middle-class core, and the military seems loyal, making a Ukraine-style change unlikely. A long weekend national holiday for Carnival and now the anniversary of Chavez's death have taken some of the wind out of the protests, but a hard core of students and radical opposition leaders are still on the streets. Some opposition leaders called for a day without protests on Wednesday to show respect for Chavez's memory.But students said they would not stop, and firebrand legislator Maria Corina Machado announced a march in the western city of San Cristobal, which has seen the worst of the unrest. "They're killing people and holding a national party, so why should we respect the day of Chavez's death?" said Jose Garcia, 26, wearing a balaclava and clutching stones to throw at police in Caracas' Plaza Altamira.

The numbers of demonstrators seldom go beyond a few thousand, a far cry from the vast street protests against Chavez that led to a brief military coup against him in 2002.

State media have rolled out round-theclock hagiographical coverage of the late president. Some Chavez loyalists seem barely able to use the word "death", preferring euphemisms such as his "physical disappearance" or "sowing in the sky". "Chavez didn't die, he multiplied!" read a scrolling headline on state TV. Some of Chavez's highest-profile friends, including leftist leaders from around Latin America, were in Caracas. "We're here, not only to remember the death of our comrade and brother Hugo Chavez, but also his struggle for Latin American unity, democracy and peace," Bolivian President Evo Morales said on arrival. "We also want to proclaim our solidarity for the Venezuelan people, the Bolivarian revolution. It's our duty to defend elected presidents ... we do not accept coup attempts," he added, standing next to Maduro at the presidential palace.