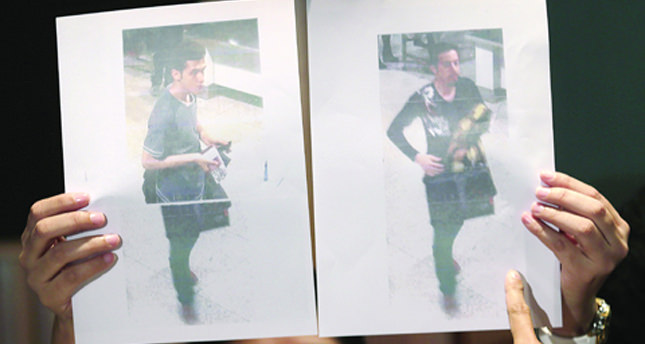 Pictures of two Iranians who boarded a now missing airliner with stolen passports are being heavily scrutinized, the photograph shows that the two men have the same lower body, leaving people to wonder if they were doctored

Kuala Lumpur - Malaysian police dismissed claims Wednesday that they doctored photographs of two Iranians who boarded a missing airliner with stolen passports -- saying one man's legs were spliced over the other's in a photocopying error.

Revelations that two passengers on board Malaysia Airlines flight MH370 jet were travelling on stolen EU passports fuelled fears of a terrorist attack after it vanished on Saturday.

Police on Tuesday released photographs of the two men -- now believed to be illegal immigrants with no apparent links to extremist groups -- but the lower halves of the images were identical.

Social media users who saw the photos suggested they may have been intentionally doctored.

"Why did they try to photoshop the legs on the released photo of the Iranians?" one user asked.

"Photoshop failed! same legs on those pics. are they for real?" another posted.

But police spokeswoman Asmawati Ahmad said the odd appearance of the photos stemmed from a police staff member placing one on top of the other when photocopying them.

"It was not done with malice or to mislead," she told AFP.

She said this had been explained to some news photographers when the photos were handed out.

The error fuelled criticism of Malaysian authorities, who are accused of blundering and making contradictory statements since the plane went missing en route from Kuala Lumpur to Beijing early Saturday.

An extensive international search involving vessels and aircraft from several nations has so far turned up no sign of any wreckage.
Interpol identified the Iranian pair as Seyed Mohammed Reza Delavar, who used a stolen Italian passport, and Pouria Nourmohammadi, who used an Austrian one.

Both passports had been stolen in Thailand.

Authorities have said they believe the Iranian pair were illegal immigrants who were on their way to Europe via Beijing.