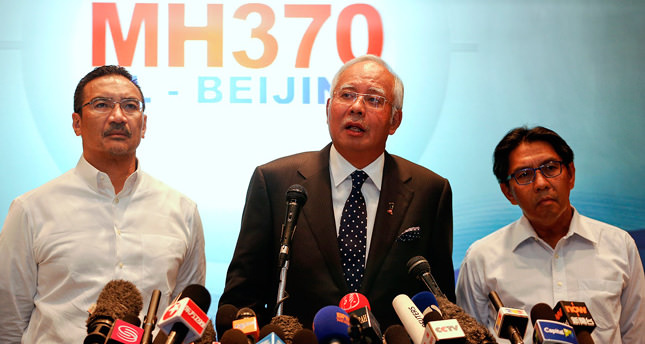 by French Press Agency - AFP Mar 16, 2014 12:00 am
KUALA LUMPUR – New revelations about a missing Malaysia Airlines plane have left anguished relatives contemplating the prospect that those on board endured a terrifying, high-altitude hijack ordeal that may have lasted nearly eight hours.

But while the disclosures have led to increased speculation of a terror plot or pilot suicide, for some they offered a glimmer of hope -- that the Malaysia Airlines plane carrying 239 passengers and crew may have landed safely and that, somehow, loved ones may be alive.

For relatives of Bob and Cathy Lawton, a missing Australian couple, the possibility of a terrifying drawn-out fate at thousands of feet reflected their deepest fears.

"That's one of the worst things I could have hoped for," Bob's brother David Lawton told News Limited newspapers.

"Even if they are alive, what did they have to put up with?"

Briefing the press on Saturday, Prime Minister Najib Razak declined to use the word hijack, but said new data suggested a "deliberate action" to divert the plane.

The Boeing 777's communications appear to have been switched off manually before the jet veered westward and flew for hours.
What happened during that time remains a mystery. But one report of the plane fluctuating from low to high altitude fuelled fears the passengers may have been well aware they were in terrible danger.

It cited Malaysian military radar signals, but the data has not been confirmed by the authorities.

For relatives in China, which had 153 citizens on the flight, the investigators' breakthrough just brought more distress and frustration.

"We are experiencing an ordeal. We are still waiting for (more information)," said one tearful man emerging from a meeting between Malaysia Airlines and relatives in Beijing on Sunday morning.

"We are extremely anxious. A long time has passed and they don't disclose (more) information," he said.

Another branded the meeting "a joke".

"Until they say what really and truly happened, what good is it?" he said.

Yet for others the new evidence brought relief -- and a reason for hope.

"Our family is relieved that there's an official statement from the Malaysian government, delivered by the Malaysian prime minister, that there's a possibility that the aircraft might have been hijacked," said Indonesian Santi, 42, who goes by one name.

Her brother Sugianto Lo was on the flight with his wife Vinny Chynthya.

"There have been too many speculations about the missing plane so this official statement has helped to quash some of them.

"At least it gives us hope that our loved ones are still safe. We really hope that the various governments will help to look for the plane," she said.

While the theory that the plane landed somewhere and has remained hidden is seen as improbable by experts, most do not discount it as impossible.

The multi-nation search is now focused on two vast areas, stretching from Kazakhstan to the southern Indian Ocean.

Malaysian Subramaniam Gurusamy, 60, whose 34-year-old son Puspanathan Gurusamy was on board, refused to believe the worst.

"I am praying every day for divine help. I will not lose hope. I want to hear my son cry out 'Father!" he said.

Selamat Umar, 60, also from Malaysia, placed his faith in his 29-year-old son Khairul Amrison's ability to survive whatever he confronted.

He said the new evidence was "a good sign which shows the plane can be detected and the passengers are safe if not all, then some".

"It may be a hijack, but why have there been no demands?" he said.

Although so many questions remain, he is clinging to the belief that his son may one day come home.
"We are definitely worried about his safety but confident that those on the plane will do what they can to survive," said Selamat.

"My son is a Muslim who fasts every Ramadan so I am sure he has strength."