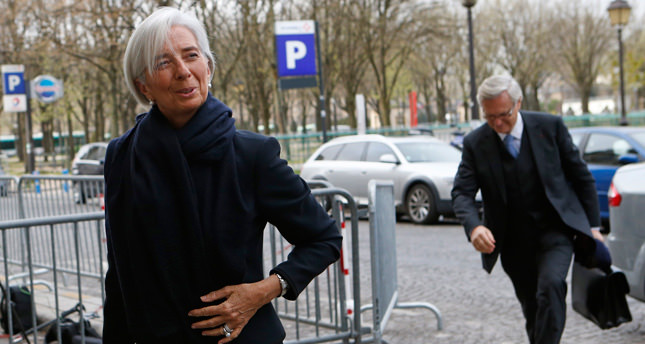 by French Press Agency - AFP Mar 19, 2014 12:00 am
PARIS – IMF chief Christine Lagarde arrived at a Paris court on Wednesday for what is likely to be a bitter face-off with her former cabinet director in a high-profile corruption case.

This is the third time that Lagarde, considered one of the most powerful women in the world, is facing questions over her handling of a 400 million euro ($557 million) state payout made to disgraced tycoon Bernard Tapie in 2008 when she was France's finance minister.

She will be questioned by prosecutors working for the Court of Justice of the Republic, a special court that probes cases of ministerial misconduct, amid suspicions that Tapie received favourable treatment in return for supporting Nicolas Sarkozy in the 2007 election.

Prosecutors have suggested that Lagarde, who at the time was finance minister, was partly responsible for "numerous anomalies and irregularities" that could lead to charges for complicity in fraud and misappropriation of public funds.

Wearing a dark suit and scarf, she called out "hello" to journalists before walking into the court.

Her former cabinet director Stephane Richard, who is now head of telecoms giant Orange, arrived shortly before her.

He is one of five people who have already been indicted in the case.

Lagarde herself avoided being formally charged last year. If she had been charged, she would likely have had to quit as head of the International Monetary Fund.

Instead, she was placed under a special witness status that forces her to come back for questioning when asked by the court - and leaves the door open for charges at a later date.

The IMF has always backed her in the case.