Obama calls Europe and China to unite against Russia 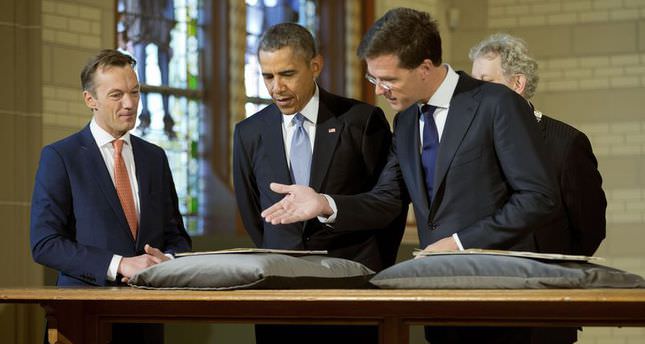 by Associated Press Mar 24, 2014 12:00 am
THE HAGUE, Netherlands – President Barack Obama delved into a day of delicate diplomacy Monday as he sought to rally the international community around efforts to isolate Russia following its incursion into Ukraine.

Hours after arriving in the Netherlands for a nuclear summit, Obama held one-on-one talks with Chinese President Xi Jinping. China has often sided with Russia in disputes with the West, but U.S. officials have been appealing to Beijing's well-known opposition to outside interference in other nation's domestic affairs.

Obama treaded carefully in statements with Xi before their meeting, saying only that they planned to discuss the situation in Ukraine.

Obama's meeting with Xi opened a week of international travel where crisis in Ukraine tops the agenda. After arriving in the Netherlands on a sunny and brisk Monday morning and meeting with Dutch Prime Minister Mark Rutte, Obama asserted that the U.S. and Europe stand together behind Ukraine.

No issue commands more of Obama's and Europe's attention than Russia's annexation of the Crimean Peninsula and the fear that Moscow could decide to expand further into Ukraine. But Obama also is attempting to use his weeklong trip to personally reconnect not only with Europe but Asia and the Middle East, all strategically crucial regions with their own tensions and qualms about the U.S.

In an interview with the Dutch newspaper de Volkskrant published before he arrived Monday, Obama says his message to European leaders is that Russian President Vladimir Putin needs to "understand the economic and political consequences of his actions in Ukraine."

Discussion among Obama and his G-7 counterparts will center on economic aid to Ukraine, while at the same time seeking to segregate Putin from the exclusive group, which Russia usually joins in Group of Eight meetings.

More broadly, the Ukraine crisis will test Obama's ability to forge a unified and forceful stance against Russia from European leaders who are alarmed by Putin's moves but whose economies are dependent on Russian energy and trade.

In the interview, Obama conceded that the sanctions he has threatened against Russian economic sectors could have worldwide impacts.

But, he added: "If Russia continues to escalate the situation, we need to be prepared to impose a greater cost."