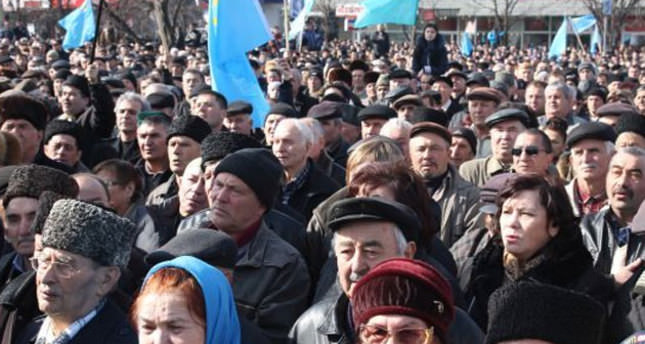 Though the referendum in Crimea passed through a popular vote, many non-ethnically Russian residents of the peninsula are staunchly opposed to what the Crimean parliament referred to as "reunification." According to a 2001 census, the then Autonomous Republic of Crimea was demographically divided between three major ethnic groups: Russians, indigenous Crimean Tatars and Ukrainians.

The latest development from what was once Ukraine's fertile port region is that the regional government has begun issuing Crimean residents Russian passports. The move comes with a dark ultimatum.

As the deputy head of Federal Migration Services of the Federation of Russia announced Monday at a press conference in Moscow, Crimeans who wish to remain Ukrainian citizens will have to apply for residence permits to live in their current homes. Worse yet, those refusing to switch national allegiance to became Russian citizens will only have one month to complete the necessary applications.

This new action, deliberately aimed at the indigenous Crimean Tatars and ethnically Ukrainian minorities of the peninsula, has caused much unrest as it sends a clear message to the communities in question: either abandon the identities of your own people or leave.

Since the crisis in Crimea has broken out, unrest has become the general consensus among the Crimean Tatar community and many now believe they are once again being forced from their homeland at the hands of Russia. "If I want to continue to live in my home I will be forced to get a residence permit," Adil Giray, a Crimean Tatar student, told Daily Sabah. "This is ridiculous. It appears as though we Crimeans who refuse to be Russians are the only ones facing this problem. "What makes it worse," Giray continued, "is that the Russian authorities have not told us what rights we will have under these residence permits. They only gave us a month to decide and have already begun issuing Russian passports. "Many Crimean Tatars are once again being forced to leave their homes," Giray added.

Of the three, the Russians are the largest ethnic group in the peninsula. It was this Russian majority that wished to secede from Ukraine following the ousting of the pro-Russian president. With their wish now granted, the Russian government has annexed the Crimean Peninsula despite condemnation by world leaders.