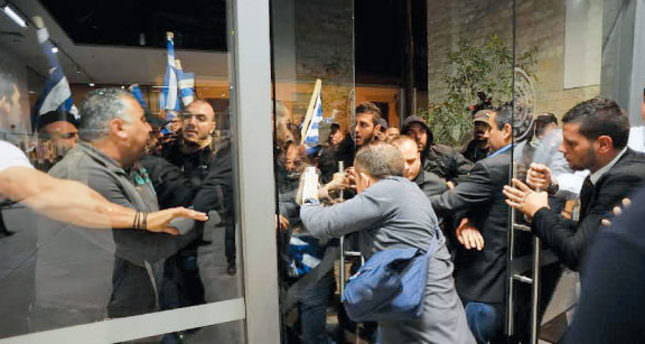 ISTANBUL — The former president of the Turkish Republic of Northern Cyprus, Mehmet Ali Talat, was attacked with sparklers by members of the Greek Cypriot National Popular Front while at a conference in Greek Cyprus.

Talat said he viewed this type of protest as normal in the first stages of a negotiation process; however, the extreme right-wing members of ELAM intruded on the conference area with stones and bats in their hands. Talat added that one person threw a sparkler inside and another threw it back outside.

In a statement to Daily Sabah, Talat confirmed that the attack was launched by members of ELAM, known for their aggressive attitude and behavior. "After the conference ended, members of ELAM were protesting and then they broke into the hall, throwing inflammable material inside. Greek police immediately intervened and took the aggressors out," Talat said. Talat expressed that the incident was caused by a lack of security and insufficient security precautions. He added that it is very unfortunate that a conference where the resolution process was being discussed was attacked. He affirmed that the attack showed, once again, just how necessary the negotiations are.

The president of Greek Cyprus, Nikos Anastasiades, called Talat to express his apologies for the in- cident. "While at the place of attack, Anastasiades called me to apologize and promised not to give credit to such incidents and not to allow them to affect the negotiation process. The government spokesman also called. They were fairly moderate and promised to take necessary precautions to prevent such actions from taking place again," Talat added. Greek Cypriot Spokesman Hristos Stilianidis also noted that Anastasiades and the government consider these incidents terrorist and illegal in nature and that the Greek police arrested three people in relation to the incident.
It was reported that, three people have been arrested on suspicion of taking part in the protest. Government spokesman Christos Stylianides confirmed that President Nicos Anastasiades had ordered an investigation into the issue.

Active in Cyprus, the extremist ELAM organization is known to be an offshoot of the radical right-wing Golden Dawn Party, which succeeded in entering the Greek Parliament. The organization which has fanatical ideas against Turks and foreigners is supported by the youth as well.

As supporters of Hellenism in Cyprus, the ELAM organization formerly attacked Turkish Cypriots in a two-nation event in Larnaca. Some Turks were wounded in the attack. Cyprus was split in a Turkish intervention in 1974 triggered by a failed Greek-inspired coup in the island. Greek Cypriot community in the island is represented by inter-nationally-recognized Republic of Cyprus while self-styled Turkish Republic of Northern Cyprus is only recognized by Turkey.
Last Update: Mar 28, 2014 6:26 am
RELATED TOPICS