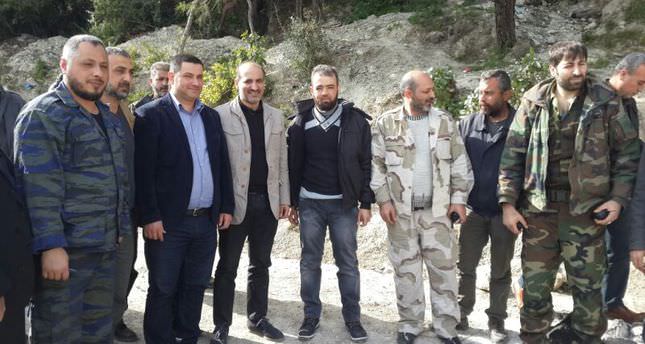 by Raide Oral
Apr 02, 2014 12:00 am
SYRIA – The head of Syrian National Coalition (SNC) Ahmed Jarba and member Ahmed Jakal paid a visit to Turkmen fronts in the northern Syrian region of Bayir-Bucak, Latakia on Tuesday.

The pair visited Turkmen military units and positions. The SNC delegation also met with villagers. Jarba said Turkmens are an essential part of Syria and took part in the resistance without any hesitation. He further said that the SNC appreciates the Turkmen's role and will continue to give support.

The SNC delegation visited the strategic hilltop Observatory 45, the villages of Kasab and Bayt Helebiyye. Jakal extended his gratitude to Jarba for his visit and assistance. The delegation also met with military reserve officers located at Jebel al-Krad.

It is reported that the insurgents are highly motivated after advancing through the Turkmen territory of Latakia and invading Observatory 45 and some other provinces in Kasab.