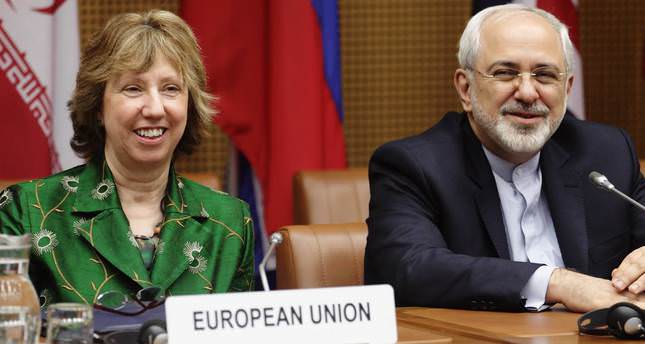 VIENNA — The powers want Iran to scale back its uranium enrichment activity to deny it any capability to quickly produce an atomic bomb, if it decided on such a course. Iran says its nuclear program is entirely peaceful and wants them to lift sanctions.

Chief negotiators from Iran, the United States, France, Germany, Britain, China and Russia started a two-day meeting at the U.N. complex in Vienna, where they have held two previous such sessions since February. "We are involved in very detailed and substantial negotiations and we are trying as hard as we can to drive the process forward," the spokesman for European Union foreign policy chief Catherine Ashton, who coordinates the discussions on behalf of the powers, told reporters.

Both sides say they want to start drafting a comprehensive agreement in May, some two months before a July 20 deadline for finalizing the accord. Western official say, however, that the parties are still far apart on key issues. "What matters most to us is that there is a good agreement. Clearly we want to make progress as fast as possible but the most important thing is the quality of the agreement,"

Ashton's spokesman, Michael Mann, said. "It has to be a good agreement that everyone is happy with. So we will work as hard was we can to achieve that."

Iranian and U.S. negotiators are wary that any deal will face criticism from conservative hardliners at home wedded to confrontation since Iran's 1979 Islamic Revolution.

The six nations have agreed internally to have a draft text of an accord by the end of May or early June, one diplomat from the powers said, adding however: "We're still in an exploratory phase ... In the end, things will happen in July."

Tuesday's opening session was chaired by Ashton and Iranian Foreign Minister Mohammad Javad Zarif, but their deputies later took over.
The Islamic Republic says its enrichment program is a peaceful bid to generate electricity and has ruled out shutting any of its nuclear facilities.

The United States and some other Western countries have accused it of working on developing a nuclear bomb capability. Israel has threatened to attack its long-time foe Iran if diplomatic efforts fail. Iran says it is Israel's assumed atomic arsenal that threatens peace and stability in the Middle East.

The diplomat said issues to be discussed at the April 8-9 meeting included how the United Nations nuclear watchdog would verify whether Iran was meeting its end of any deal, suspected past atomic bomb research by Tehran, and how to deal with U.N. Security Council resolutions on Iran adopted since 2006.

Refined uranium can be used to fuel nuclear power plants, Iran's stated purpose, but can also provide material for a bomb, which the West suspects may be Tehran's ultimate aim. The Arak reactor, once operational, can yield plutonium - another weapons-usable fissile material - but Iran says it only intends to use it for medical and agricultural research ends.

The goal of the negotiations begun almost two months ago is to hammer out a longterm deal to define the permissible scope of Iran's nuclear program in return for an end to sanctions that have hobbled the OPEC country's economy.

In November, the two sides agreed an interim accord curbing some Iranian enrichment activities in exchange for some easing of sanctions. This six-month deal, which took effect on Jan. 20, was designed to buy time for talks on a final accord.

The talks can be extended by another half-year if both sides agree to do so, and negotiate the content of an extension deal.