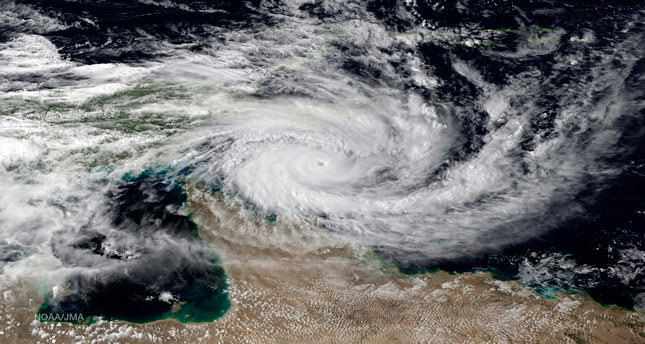 by French Press Agency - AFP
Apr 11, 2014 12:00 am
SYDNEY — A cyclone packing winds of up to 170 miles (275 kilometers) an hour swept towards Australia's Great Barrier Reef coast Friday, forcing thousands of people to hunker down as authorities warned of potential devastation.

Cyclone Ita, while downgraded from a maximum level five to a category four storm, was expected to bring fierce gales when it hits north of Cooktown, some 1,600 kilometers from Brisbane, late Friday.

"Anything over 80K will put a piece of tin through you and chop your head off, it will lift roofs off, it will make severe damage so the best place to be is staying inside," he said.

Scott said that in the view of one senior police officer in the area, "the Cooktown you see today won't be here tomorrow".

Queensland Premier Campbell Newman warned that homes built prior to 1985 when new building regulations were enacted may not withstand the impact of the storm, and urged residents to head to local cyclone shelters.

Ita sat some 105 kilometres northeast of Cooktown, a coastal community of 2,400 people, shortly before 0800 GMT.

A warning zone extended from Coen in the far north to Innisfail in the south, taking in Cooktown and the Great Barrier Reef tourist hubs of Port Douglas and Cairns.

"This is an extreme event and it has the possibility to take lives and the potential to severely damage property in north Queensland, " warned Queensland's Emergency Services Minister Jack Dempsey.

Tropical storms are common in northeast Australia. This one is stronger but not as widespread as the monster Cyclone Yasi system which tore through the region just over three years ago, ripping homes from their foundations and devastating crops.

"Basically this is a very serious cyclone," Andrew Tupper from the Bureau of Meteorology told the ABC. "It's very compact, it's an intense system."

The bureau expects Ita to make landfall near Cape Flattery some 70 kilometers north of Cooktown on the sparsely populated Cape York peninsula around midnight (1400 GMT).

It warned that while the strongest winds will be concentrated near the eye of the storm, destructive winds, heavy rainfall possibly leading to flash flooding, and coastal inundation from a storm surge all pose threats.

The power of storm surges was shown in November when Super Typhoon Haiyan pummelled the Philippines with record winds of 315 kilometers (195 miles) an hour, with entire towns wiped out when tsunami-like waves crashed hundreds of metres inland.

Australia is much better equipped to handle natural disasters than its Asian neighbour. Nevertheless, Premier Newman warned that in the worst-case scenario, storm surges of up to two metres above normal high tides could hit areas including Cairns, depending on the cyclone's path.

"If the track changes, then we could see more significant impacts along the coast from Cooktown all the way through to Cairns and also probably further south," he said.

"People should be concerned if the track changes down the coast for a storm surge."

He warned those in Cooktown and the aboriginal community of Hope Vale further inland that they should have evacuated to cyclone shelters if their homes were built before 1985, and also cautioned that telephone and electricity could be down temporarily after the storm passes.

"I want people to know the government has done everything it possibly can and after the event, we're mobilising to get in and help the affected communities," he added.

Brendan Cullen, manager of the Sovereign Resort Hotel, one of three hotels in Cooktown, said locals were used to cyclones and had prepared their homes and businesses by taping up windows and securing debris.

But he said concerns were growing. "We're worried about it landing right on top of us and the storm surge.

"As far as the general feeling in town, it's a windy place anyway so it's not as if there's a lot of debris lying around," he told AFP.

"At this particular junction there's a bit of anxiety. It stands to reason that if it comes this way with those winds... there's going to be some sort of damage in town."