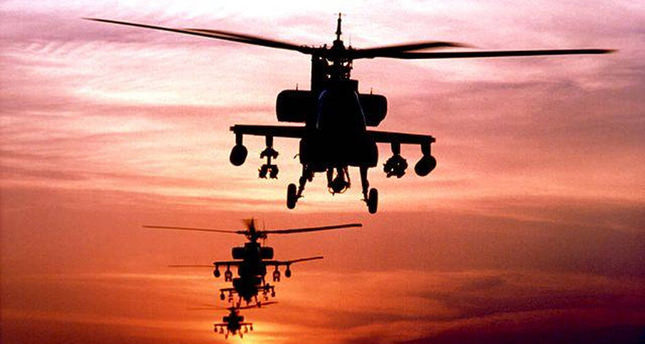 by Raide Oral
Apr 23, 2014 12:00 am
ISTANBUL — The U.S. will deliver 10 Apache attack helicopters to Egypt, to help what U.S. officials called the country's efforts against terrorism. The move comes months after the U.S. partially suspended an aid program to Egypt after a military coup that ousted democratically elected president Mohamed Morsi and launched a violent crackdown on pro-Morsi groups.

Secretary of State John Kerry told the U.S. Congress Egypt upheld its obligations under the peace treaty between Egypt and Israel and thus deserved a partial resumption of the aid. But Kerry was cautious about democratic progress in Egypt and urged the coup regime to ease restrictions on freedoms.

Speaking about the issue, Mustafa Sıtkı Bilgin, a Middle East expert, said: "There are certain reasons behind American President Barack Obama's decision to send 10 Apache helicopters to Egypt. The first reason was to contribute to the security of Israel. This issue had been the main pillar of American policy toward the Middle East since the end of World War II. As the armed Egyptian tribes are against the military regime and its supporters, namely the U.S., Europe and Israel, they posed a threat to the security of these countries.

The second reason is that the armed Egyptian tribes also could pose a threat to the Suez Canal where it is situated closer to the Sinai peninsula. So protection of the security of the Suez Canal constitutes a cardinal importance to Western interests and for international trade. Last but not least, Obama's decision could also be regarded as open American support for the current military regime in Cairo. We also need to bear in mind that Obama's decision is not certain because it needs to be approved by Congress."

Egypt has been a major recipient of U.S. military aid for decades after it ended hostilities with Israel through a 1979 peace treaty.