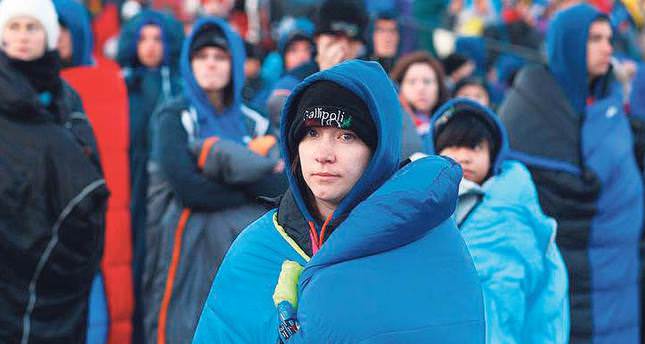 Çanakkale's Anzac Cove was again flooded with thousands of Australians and New Zealanders to attend a dawn service paying tribute to soldiers who fought and lost their lives at Gallipoli in 1915.

ISTANBUL—The day holds a special place not only in the Turkish nation's history, but also of Australians and New Zealanders who suffered during one of the fiercest battles in World War I.

Thousands of people arrived on the Gallipoli Peninsula ahead of the 99th anniversary of the Gallipoli campaign during World War I to visit sites such as the Shrapnel Valley Cemetery, Lone Pine Ridge and Chunuk Bair.

Australian veteran soldier Mark Sampson was among those who made the trip, along with a large group of people. He said that he visited Turkey two times this year and added, "Many people in Australia think the Gallipoli campaign marks the beginning of good relations between our countries." Sampson said one of his relatives served during the campaign and is buried on the Nek Cemetery situated in the Chunuk Bair. Sampson also recounted former Turkish President Mustafa Kemal Atatürk's speech on the battle: "Those heroes who shed their blood and lost their lives…you are now lying in the soil of a friendly country. Therefore rest in peace. There is no difference between the Johnnies and the Mehmets to us where they lie side by side here in this country of ours…You, the mothers who sent their sons from far away countries, wipe away your tears. Your sons are now lying in our bosom and are in peace. After having lost their lives on this land, they have become our sons as well." The dawn service is held on April 25 of each year and is a national holiday in both Australia and New Zealand where other celebrations take place. Along with the dawn service, other commemorations are being held today on Anzac Cove, Lone Pine Ridge and in front of the New Zealand National Monument.

New Zealand's Governor-General Sir Jerry Mateparae and Lady Janine Mateparae arrived in Ankara on Tuesday and were welcomed by Turkish President Abdullah Gül. Before leaving New Zealand, Mateparae said earlier that visit was an opportunity to convey to Turkey the importance New Zealand is placing on the centenary commemorations that will be held at Gallipoli next year. Australian Minister for Veterans Affairs Michael Ronaldson also paid an official visit to Çanakkale's Governor Ahmet Çınar, during which he extended his thanks to Çınar, stating, "I would like to express my deepest gratitude for your contributions and collaborations for the centenary commemorations of the Gallipoli campaign next year."

The Battle of Gallipoli was a World War Icampaign between 1915 and 1916 and the alliance, known as Australian and New Zealand Army Corps (ANZAC), was formed under the commandof the British Empire. The aim was to support the Western Front as they were trying to open a supply route to Russia and the key landing was the Gallipoli Peninsula. In the 1920s, the first ceremonies were held throughout Australia and in the 1940s veterans from World War II started joining various parades.

Although the number of people attending the ceremonies declined in the 1960s and 1970s, interest resurged in the 1990s and now, just like this year, many still make the pilgrimage to the Gallipoli Peninsula to attend the dawn service.