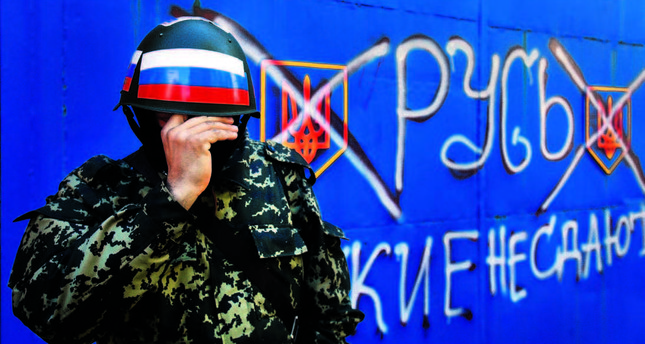 KIEV — Tensions over the Ukraine crisis increased dramatically following the strongest language used in a war of words among the foreign ministers of the U.S., Russia and Ukraine. But the most remarkable statement came from Ukrainian Foreign Minister Arseniy Yatsenyuk. While Russian Foreign Minister Sergei Lavrov said the Ukrainian operation against separatists in the east of the country was a "bloody crime" for which the government in Kiev would "face justice," Yatsenyuk on Friday accused Russia of wanting to start World War III by occupying Ukraine "militarily and politically."

"The world has not yet forgotten World War II, but Russia already wants to start World War III," Yatseniuk told the interim cabinet in remarks broadcast live. "Attempts at military conflict in Ukraine will lead to a military conflict in Europe." As both sides have deployed troops close to their frontier, Yatseniuk accused Moscow of acting like a "gangster" supporting "terrorists."

Yatseniuk took office in February after pro-European protests prompted the Kremlinbacked president to flee to Russia.

Ukraine plans to hold an election to replace Viktor Yanukovich on May 25, but the Russianspeaking east of the country has been disrupted by pro-Moscow militants who have taken over the city of Slaviansk and public buildings elsewhere, demanding to follow Crimea into being annexed by Russia. Russia denies involvement but has denounced the Ukrainian government, which it says is illegitimate and backed by "fascist" Ukrainian nationalists, and has threatened to move in to protect ethnic Russians and Russian- speakers in Ukraine.

Also the U.S. Secretary of State John Kerry has accused Russia of "distraction, deception and destabilization" in eastern Ukraine. In a strongly worded statement, he called on Moscow to help defuse the crisis there or face further sanctions. Kerry said Russia had "put its faith in distraction, deception and destabilization" and said the government had failed to call for separatists to leave official buildings and give up their arms as stipulated by the Geneva agreement. On April 21, Russian foreign minister Sergei Lavrov accused Ukraine of violating an accord reached in Geneva on April 17.

Yatseniuk called on Moscow to fulfil obligations to persuade activists in eastern Ukraine to lay down arms under a four-way agreement signed last week in Geneva by the two governments, as well as Ukraine's U.S. and EU allies.

The prime minister said Kiev was still waiting for a response to an official request for details of Russian military exercises on the border. It made the request through mechanisms of Europe's OSCE security body and set a deadline of today. Ukrainian Defense Minister Mikhail Koval said Russian troops on maneuvers had come within one kilometer of the border but had not crossed. Ukraine will regard any incursion by Russian forces across the border as an invasion and the attackers will be killed, an aide to acting president Oleksander Turchinov said on Friday. On the other hand, Russian Foreign Minister Sergey Lavrov has accused the West of plotting to control Ukraine and said the pro-Russian insurgents in the southeast would lay down their arms only if the Ukrainian government clears out the Maidan protest camp in the capital Kiev. "The West wants... to seize control of Ukraine because of their own political ambitions, not in the interests of the Ukrainian people," Lavrov said on Friday.

In southeastern Ukraine, seven people were injured by a blast at a checkpoint set up by local authorities and pro-Ukraine activists outside the Black Sea port of Odessa. Unrest began in Ukraine last November over whether the country should look toward Moscow or the West.

Last month Russia annexed Ukraine's mainly ethnic-Russian Crimea. It followed a referendum in the region that backed joining the Russian Federation but which the West and Kiev deemed illegal.
RELATED TOPICS