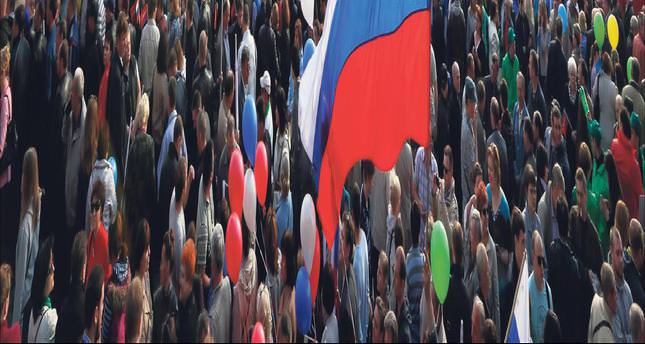 International Workers' Day was celebrated across the world, with demonstrations and protests in many countries, amid a heavy police presence

Tens of thousands of people hit the streets around the world to mark International Labor Day yesterday.

More than 100,000 people took part in a march on Moscow's Red Square to mark Labor Day, the first such event on the doorsteps of the Kremlin since the collapse of the Soviet Union 23 years ago. Patriotic fervor was high. Some protesters held Soviet and Russian flags, others raised banners backing President Vladimir Putin's decision to annex the Crimean Peninsula from Ukraine last month. "Crimea belongs to Russia forever," read one banner.

Some 2 million people attended similar marches in other Russian cities, the Interfax news agency reported. Putin faced mass protests against his rule after his return to the Kremlin as president in 2012. The annexation of Crimea is believed to have boosted his approval rating. Rallies also took place across Asia, including in Hong Kong, Jakarta, Kuala Lumpur, Singapore, Taipei and Seoul.

In Cambodia, security forces armed with sticks and batons forcibly dispersed dozens of May Day protesters near Phnom Penh's Freedom Park, according to an AFP photographer.Several people were beaten.

The park, opened by the government in 2010 as a designated area for people to air their grievances, was closed off by police with barbed wire as the authorities sought to clamp down on protests against long-ruling strongman Prime Minister Hun Sen. "We are sad that we could not mark May Day properly. Workers' rights have been thwarted," said Ath Thorn, president of the Coalition of Cambodian Apparel Workers Democratic Union.

Indonesian police said some 33,000 workers were set to rally across the capital Jakarta.Unions said up to two million workers would be out in force to demand better working conditions in Southeast Asia's most populous nation, although in previous years the numbers have come in much lower than such forecasts.

"Demonstrations will be held nationwide but the biggest will be in Jakarta, with around 33,000 workers," police spokesman Rikwanto told AFP, adding that 18,000 police officers would be out on the streets.

He said workers were planning further rallies on Friday, with some 10,000 protesters expected to turn out.

In Hong Kong, union organizers said some 5,000 people were set to join their march from the city's Victoria Park to government headquarters, with better working hours top of the agenda.

Several thousand people were to attend a rally in Kuala Lumpur against price hikes implemented by the long-ruling government, which already is under domestic and international scrutiny over its handling of the passenger jet that disappeared on March 8.

The protest took aim at price increases stemming from subsidy cuts as well as plans to introduce a general sales tax from next year. Opposition leader Anwar Ibrahim was due to participate.

Meanwhile in Taiwan, tens of thousands of Taiwanese workers marched in heavy rain to defend labor conditions and protest what they said was a decline in wages.

Most of the participants came from unions and labor organizations such as the Taiwan Confederation of Trade Unions and the National Alliance of Unemployed Workers.

Taiwan Labor Front secretary general Sun Yu-lian told DPA that "real wages have fallen to levels not seen since the 1990s and poverty among working-class families is becoming unbearable."

In Seoul, around 5,000 workers attended a rally outside Seoul railway station in the afternoon but this year's traditional May Day trade union gathering was overshadowed by the ferry disaster that claimed hundreds of lives, many of them schoolchildren.

In Singapore, critics of the government's manpower and immigration policies held a rally in a designated protest park.

The police warned the organizers, who have been accused of fanning xenophobia against foreign workers, against carrying out plans to deface a poster of Prime Minister Lee Hsien Loong as part of the protest.