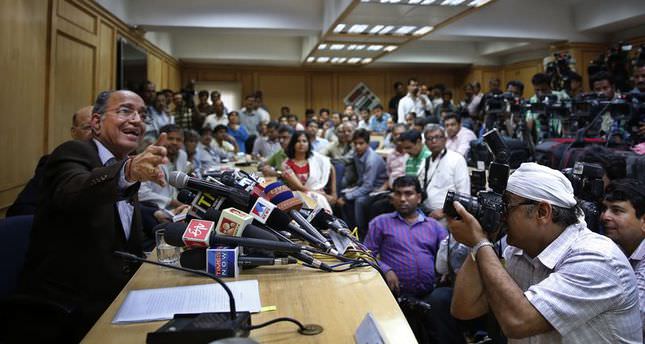 by AA May 09, 2014 12:00 am
NEW DELHI — India's Election Commission has said, in a press conference held Thursday, that it is not afraid of any political party and dismissed allegations of bias saying it is committed to ensuring "free, fair and peaceful" elections in the last leg of voting in India's national elections.

"We have taken note of rather harsh and sweeping allegations made against the Election Commission by certain parties," VS Sampath, chief election commissioner, said.

The commission is facing mounting criticism from the Hindu nationalist Bharatiya Janata Party after it denied permission to the party's prime ministerial candidate, Narendra Modi, to hold a rally at a "sensitive" venue in the holy Hindu city of Varanasi.

"Where security issues are involved, the election commission goes by the expertise given by local administration," Sampath reportedly said rejecting the Bharatiya Janata Party's demand to recall a senior election official who turned down party's request to hold the rally.

In response, Modi criticized the Congress Party saying "the Congress must understand. The people have defeated you; the election commission can't make you win."


"Why am I being stopped? My silence has more strength than my speech and Ma Ganga (Mother Ganges) I will return tomorrow," Modi added.

Earlier, members of the Bharatiya Janata Party leadership and party workers protested for three hours against the commission outside the Benares Hindu University campus demanding the removal of District Magistrate Pranjal Yadav who denied permission for the rally.

However, two other events planned by the Bharatiya Janata Party were granted permission to take place.