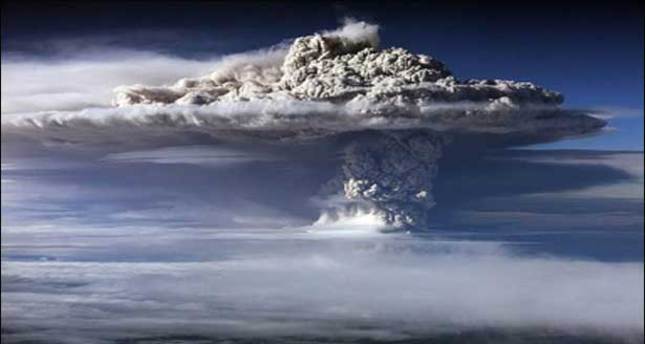 by May 31, 2014 12:00 am
SYDNEY — Flights into and out of the northern Australian city of Darwin were cancelled Saturday, and some to Bali affected, after huge ash clouds were thrown up by an Indonesian volcano.

"The volcano is continuously erupting," Tim Birch from the Bureau of Meteorology's Volcanic Ash Advisory Centre in Darwin told AFP.
Birch said one plume was affecting northern Australia and impacting Darwin and was expected to linger for at least 18 hours.

Another was located over central Australia, which could cause problems for overland flights, while a third was about 100 kilometres (60 miles) from Denpasar airport on Indonesia's Bali.

"All of the plumes will be affecting aviation," he said.

Surono, an Indonesian government volcanologist who goes by one name, said that Sangeang Api was spewing columns of ash up to 2,500 metres (8,200 feet) into the air on Saturday.

Indonesian flag carrier Garuda cancelled three flights to Denpasar from nearby airports, transport ministry spokesman J. A. Barata told AFP. However, Denpasar airport reported good visibility and was not itself affected by the ash, he said.

Two small airports close to the volcano in central Indonesia -- one on the island of Sumbawa and another on neighbouring Sumba -- closed Saturday due to the eruption, Barata said. The airport on Sumbawa was shut for several hours, while the second was due to remain closed until Sunday.

Australia's Deputy Prime Minister Warren Truss said it could take days for Australian services to return to normal.
"Depending on wind and other weather conditions, the ash has the potential to affect flights to and from other airports, including Brisbane, during coming days," he said.

"This is currently being fully assessed."

Australian aviation authorities recommend against flights into areas with visible volcanic ash clouds because the fine particles are hazardous to aircraft engines.

A spokeswoman for Darwin International Airport told the Australian Broadcasting Corporation it was not known when flights would resume.
"At this stage it's speculation... from what I can tell, as the ash moves it dissipates so it could be good news for tomorrow," she said.

"But going on past experience, this is usually [a] 24-hour type event."

More than 7,300 people had so far been evacuated from four villages close to the erupting volcano, said Sutopo Purwo Nugroho, spokesman for Indonesia's national disaster agency.

He added there were so far no casualties.

Indonesia, home to around 130 active volcanoes, sits on the "Pacific Ring of Fire", a belt of seismic activity running around the basin of the Pacific Ocean.

In February, a huge volcanic eruption on the main island of Java killed several people, forced mass evacuations and prompted the closure of seven airports.