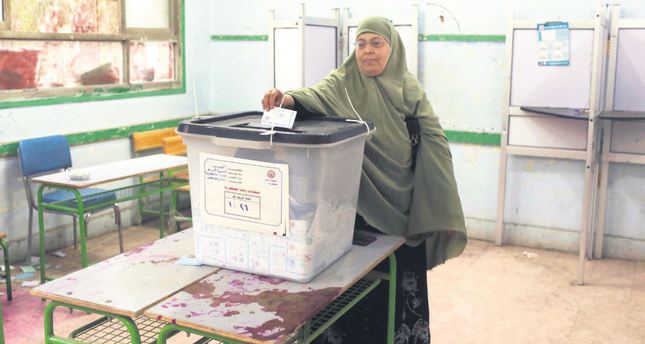 by Begüm Tunakan Jun 06, 2014 12:00 am
Both Syrian President Bashar Assad and Egyptian Abdel-Fatah el-Sissi won the majority of votes in their respective countries, which are mired in political turmoil. Even though the two leaders have appeared to use the democratic path to be elected, whether these elections were democratic is an altogether different issue.

The plausible outcome of these two elections reflects that both countries' citizens have been in favor of maintaining the status-quo and authority where instability and violence has penetrated all levels of society. Both leaders have long possessed power, but how they exercise it is crucial to understanding what has happened on the ground during the elections in both Middle Eastern countries.

Taking both elections into account, it is important to note that the two took place amid instability with a lack of true alternative. Sissi, yet another military man, was elected Tuesday as Egypt's president with 96.9 percent of the vote with the support of the most powerful elites in state institutions, business and the media. Less than one year after removing his predecessor, the Muslim Brotherhood government of ousted President Mohammed Morsi from power using Egypt's powerful military, Sissi declared that he would stand for the presidential election with the aim of restoring stability that cost dozens of lives in Egypt after the Arab Spring first broke out, when hundreds of thousands of people took over Tahrir Square demanding freedom and social justice. Since then, Egypt has faced continuing political turmoil that has brought chaos to Egyptian's daily lives.

Under Sissi's rule, military trials for civilians are expected to be implemented again and public demonstrations will be banned. This shows that Sissi has little inclination to compromise as his country has been gravely suffering from ongoing instability. To some, retired Field Marshal Sissi has been seen as a hero for ending the rule of Morsi, who alienated many Egyptians who took to the streets demanding his resignation during his rule since 2012. Many others believe that Sissi signals a return to the authoritarian security state and are calling him a new incarnation of Mubarak.

When it comes to the Syrian presidential election, the outcome is not that different as many Syrians apparently voted for Assad regime.
In confining the elections to the places where Assad wields power, Syrian President Bashar Assad won the presidential election in a landslide victory with 88.7 percent of the vote. The rationale behind Assad's victory is that Syrians opted for stability, favoring the status-quo. This despite the fact that more than 160,000 people are believed to have died and 2.8 million Syrian refugees have fled to neighboring countries since the uprisings began in March 2011, according to reports.

Syria's constitutional court announced voter turnout at 73.47 percent. Considering the number of Syrians voting in the election, it was held when a significant number of Syrian citizens had moved to different areas to escape the escalating civil war between Assad's forces and rebel groups. Most of the 6.5 million Syrians have been internally displaced and more than 3 million Syrians registered as refugees have not been able to have their say to vote. When it comes to the political participation of Syrians, the situation in Syria shows that a democratically elected president would be "inconceivable" under these circumstances. In addition, Damascus ruled out the participation of any opposition group through adopting a new law restricting the candidacy to those who hold Syrian nationality and had continuously resided in the country for the past 10 years. These criteria prevented any foreign-based opposition candidates from running against Assad in the election.

Apart from that, President Assad's key challengers, Hassan al-Nouri and Maher Hajjar, received 4.3 percent and 3.2 percent of the vote respectively. However, their electoral campaign was not that significant as the Assad electoral campaign dominated the country.

Western nations denounced the election as not being "a genuinely democratic vote," because it could not be exercised amid an ongoing civil war while Assad's regime has been held accountable for the ongoing civil war, numerous war crimes and widespread violation of human rights and international humanitarian law. While Syria's two main internal opposition groups boycotted the vote and the opposition's allies in the West denounced the ballot as a farce, a delegation of officials visiting Damascus from more than 30 countries, including Iran, Russia and Venezuela, issued a statement about the Syrian election, declaring it to be "transparent and free," according to the Associated Press.

G7 Leaders met in Belgium on Wednesday where they condemned the June 3 presidential election, stating that "there is no future for Assad in Syria. We again endorse the Geneva Communiqué, which calls for a transitional governing body exercising full executive powers and agreed to by mutual consent, based on a vision for a united, inclusive and democratic Syria." In addition, French President François Hollande, in a press conference declared that Paris would not recognize Assad's rule.

Both elections show that the status quo has been defended without putting an end to political turmoil and civil war. What is clear is that many citizens voted for stability under undemocratic rule.
RELATED TOPICS