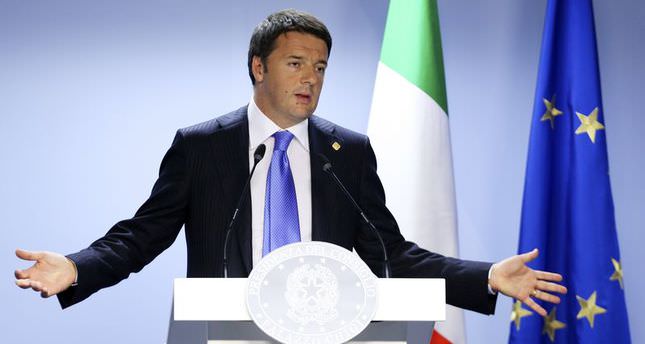 by Daily Sabah Jul 01, 2014 12:00 am
Italy, known to be one of the staunchest supporter countries of Turkey's EU bid, took over the EU presidency from Greece yesterday. Italian officials have continuously stated that Rome would like to speed up Turkey's EU accession process during its six-month term, whereas Greece was known for its distant stance against Turkey's EU accession.

Taking over the EU presidency in 1983, 1988 and 1994, Greece's position in the first half of 2014 appeared to become weaker compared to previous years in the presidency due to the economic crisis that Athens has tried to overcome for years. During its time in the presidency, dozens of ministerial meetings were held and 67 draft bills were introduced to the European Parliament. Bills on matters such as maritime policy, the Single Resolution Fund to strengthen the integration of EU economies and a bill to assure investments up to 100,000 euros (TL 290,593) will be discussed in Italy's six-month term.

During its latest term, Greece was criticized by EU experts for asserting that the country did not tackle the latest developments in Ukraine and allowed other countries to set the EU agenda.

Italian Prime Minister Matteo Renzi is expected to address the European Parliament's plenary session today in order to clarify the Italian government's priorities during his presidency term. It has been reported that economic growth, tackling unemployment, updating industrial policies to boost the competitiveness of small and medium entrepreneurship (SMEs) and improving EU institutions' images are high on the agenda.
Also, Italy will address the country's long-continued problem of illegal immigration. Italy is expected to adopt a single integrated EU immigration policy to prevent illegal immigrants from entering EU states and adopt a single procedure for refugee status in the EU.