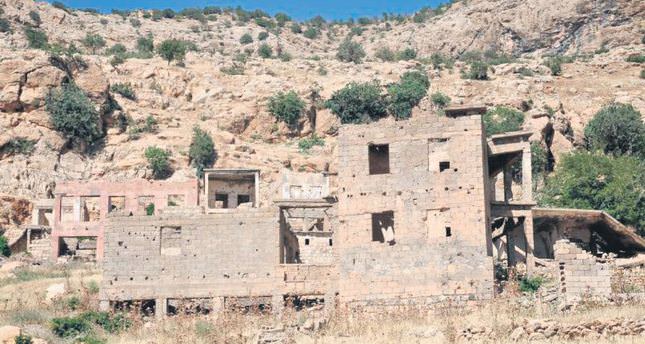 by AA Jul 17, 2014 12:00 am
Assyrian families, who fled from the southeast of the country and went to several European countries during the 1990s due to violence linked to PKK terrorism, are slowly coming back as the reconciliation process brings peace to the region.

The Assyrians from the Silopi district of Şırnak province migrated to various European countries 21 years ago. Coming back to their lands after two decades, the Assyrians began to restore their village which is in ruins. Having evacuated their village Körseli because of terror attacks back in 1993, the Assyrians are preparing for their return now that the region is peaceful and secure thanks to the reconciliation process. After emigrating to Belgium, İhsan Sakman can't contain his excitement at the prospect of coming back home.

Sakman said that he and his family have returned from Belgium to prepare the village for their return by restoring four houses in the village. Drawing attention to the difficulties they face, Sakman said, "The village has water and electricity problems as well as a lack of roads. However, the officials said that they would help us if we came back to our village. We are restoring four houses. Two people came from Germany and another two came from Belgium. Our children, who live in Europe, also came here yet they had to go back due to these difficulties we are having. If the problems of the village are solved, the youngsters will also come back to their village. "We came here, everybody welcomed us. We are very glad. The old state of mind is gone. We want to return to our village. God bless, everything will be fine." Sakman said and added that he wants officials to help them restore the village.

The former head of the village İliş Beğtaş said that people are coming back as a part of the reconciliation process. Beğtaş said these people "longed for their village while they were in Europe and they grew up with this longing. We are working on the restoration of our village. Our first buildings start to rise up yet our budget is limited. Despite all this, we are planning to finish the constructions in a very short time. There are a lot of villagers living abroad. They all await news from us. They will return to the village as soon as possible."

Local Mehmet Onuk said the village is now suitable to live in. "Our people are living here now," he stated. Pointing out that there are still some problems in the village, Onuk claimed that the municipality gave the village water to another village in the region. Onuk too wants the municipality to help rebuild, stressing that security is all they want. "There are no soldiers around the village to protect the locals," said Onuk. "It is a security problem in itself. We want these problems to be solved. People are trying to claim this village on their own. People can only come back here if they believe and trust the state has changed its standpoint."
Last Update: Jul 17, 2014 12:26 pm
RELATED TOPICS