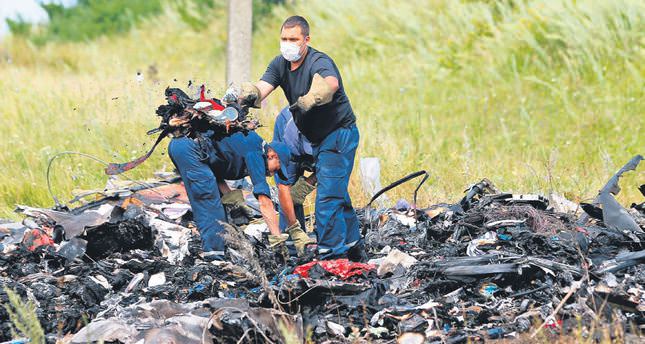 Following the downing of a Malaysian plane, international pressure has been growing against Russia regarding increased sanctions, and urging Russia to take responsibility for the actions of rebel groups in Ukraine

The leaders of major Western countries are accusing Russia of having a clear role in the shooting down of Malaysia Airlines flight MH17 on July 17 by pro-Russian separatist forces in Ukraine which killed 298 people on board. The leaders have been demanding a fully-fledged investigation and access to the crash site of the Malaysian jet, which was under control of pro-Russian rebel groups.

Regarding the rescue efforts limited by the pro-Russian rebel groups, Britain, Germany and France have urged Russia to stop arming the rebels and to persuade them to allow monitors full access to the crash site. They also stated in a meeting held on Sunday that additional possible sanctions would be ready to be implemented against Russia.

The Dutch Prime Minister Mark Rutte, whose country lost 193 citizens on the plane, told yesterday during a parliamentary session that unless the access to the site remains fully opened to international investigation, "all political, economic and financial options are on the table against those who are directly or indirectly responsible for that," referring to Russia's clear role in arming and backing the separatist groups who are seen as responsible for shooting down the plane. "It is clear that Russia must use her influence on the separatists to improve the situation on the ground," PM Rutte added.

He also stated that in an effort to investigate the crash and recover the bodies, a Dutch military plane was reportedly being sent to Kharkiv, Ukraine. In addition, three Dutch members from the Dutch National Forensic Investigations Team arrived in Donetsk yesterday to join the Organization for Security and Cooperation in Europe (OSCE) mission. However, the reports stated that the team's efforts have been hindered by the pro-Russian rebels, as the team cannot get any access to the rebel-held area due to security concerns. According to the latest reports, Dutch investigators have inspected bodies at a state in east Ukraine in order to try and recover them, thus making a progress in the investigation.

Meanwhile, the Netherlands is set to head up the investigation of the downed flight MH17 while Kiev authorities stated that Ukraine is ready to "send all bodies to Amsterdam," as the AFP news agency reported. "We are ready for the Netherlands to take upon itself the coordination of the international investigation as it is the country that suffered the most," Ukrainian Prime Minister Arseniy Yatsenyuk said yesterday.

Apart from the Netherlands, Britain has also been in favor of pushing sanctions on Russia despite the economic backlash it would cause itself. "I would say ... any sanctions will have an economic impact, and we are prepared to undertake further sanctions," British finance minister George Osborne told BBC radio's Today program, in consideration with "the greater economic hits for Britain," according to Reuters.

State Secretary John Kerry said in an interview with Fox News Sunday, reiterating the need for Russia "exert[ing] all of the influence" on the rebel groups in eastern Ukraine "that they have in order to protect the full integrity of this investigation."

Considering the role of Russian-backed rebels in the downing of the aircraft, the U.S. claimed earlier that the plane was shot down by the rebels with a Russian surface-to-air missile and training, which points to "Russian complicity" in the tragedy of the downed aircraft.

Referring to Moscow's role in shooting down the plane, Ukrainian PM Arseny Yatseniuk criticized the Russian President Vladimir Putin yesterday while urging European Union member states to take joint action against Russia through stepping up sanctions. "I do not expect anything from the Russian government. They supplied weapons, they sent in fighters. Putin should understand that it's enough already. This is not a conflict between Ukraine and Russia. It is an international conflict," Ukraine PM told yesterday in a news conference, according to Reuters.

The Ukrainian Embassy in Turkey condemned the disaster in a statement released on July 18, reiterating the long period of destabilization in eastern Ukraine that threatens not only Ukraine's future but also international stability and security.

On the other hand, Russian President Putin held the Ukrainian government responsible for the plane crash. He also criticized Ukraine "for reigniting the fighting with the pro-Russian rebels who control the crash site." "We can say with confidence that if fighting in eastern Ukraine had not been renewed on June 28, this tragedy would not have happened," Putin said yesterday, AP news agency reported. "Nobody should or does have a right to use this tragedy for such mercenary objectives," he added.

Regarding the West's decision over stepping up sanctions on Russia, Russia's U.K. ambassador stated that the sanctions would lead "Ukrainian authorities to continue violence."

Malaysia Airlines MH017 had crashed in the rebel-held area of eastern Ukraine on June 17. There were reportedly 298 passengers and crew on board. The plane was reportedly carrying at least 193 Dutch nationals, 27 Australians, 44 Malaysians, 12 Indonesians and nine British. Tensions on the Ukraine-Russia border have escalated dramatically since Ukrainian forces gained significant ground against separatists in the eastern city of Sloviansk.

As Europe has been considering tightened sanctions on Russia, other countries in the EUbloc also have a great deal to lose, as further sanctions would have a crucial impact on the energy market of European countries.
Last Update: Jul 22, 2014 12:15 pm
RELATED TOPICS