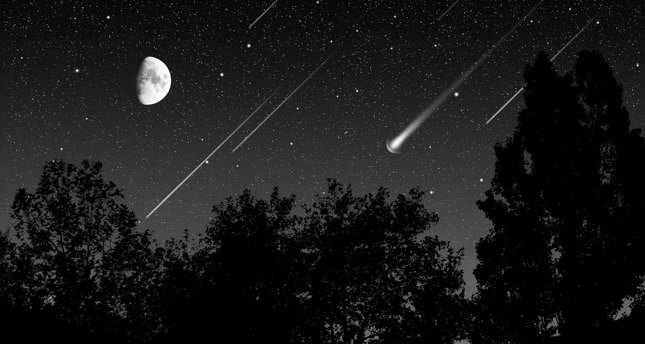 by AA Aug 12, 2014 12:00 am
The sky will witness meteor showers, also known as "shooting stars," today. In his remarks to Anadolu Agency (AA), Scientific and Technological Research Council of Turkey (TÜBİTAK) National Observatory researcher and Istanbul University member Assistant Professor Hasan Esenoğlu said the meteor shower, known as a "shooting star" among the public, will peak tonight. Esenoğlu said that tens of thousands of meteor pieces that have broken off from the comet "Swift-Tuttle" will cause a visual feast in the sky. "Some pieces which are the size of pebbles will fall on Earth.

People can contribute to science by writing down how many meteors crashed on Earth on the Meteor Organization's web site. This meteor shower is something that we should watch and be interested in. A visual feast coming from space should not be overlooked," said Esenoğlu. He stated the meteor shower can be observed on the same day next year, adding that the spectacle can be monitored in the northeast direction in a place with low light all night. He further noted the meteor shower will travel at 60 kilometers per second. Esenoğlu said there are more than 130 meteor showers occurring in a year and he listed the meteor showers as, "Quadrantid, the first week of January, Lyrid in April, Eta Aquarid in the first week of May, Orionid on Oct. 20-21, Leonid on Nov. 17-18 and Geminid on Dec. 13-14."
Last Update: Aug 12, 2014 9:52 am
RELATED TOPICS