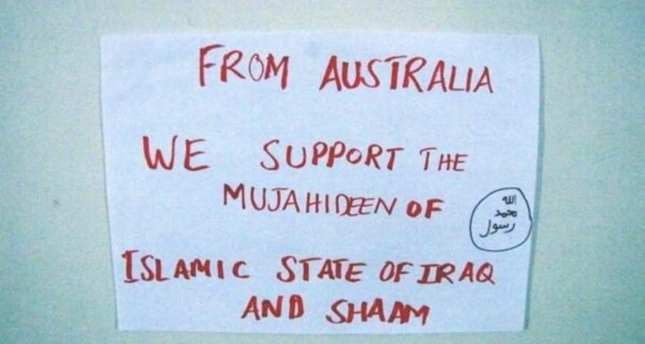 by Daily Sabah Sep 19, 2014 12:00 am
Australian police launched an operation to prevent the country's citizens from joining Islamic State of Iraq and al-Sham (ISIS),. The police arrested 15 people and claimed that they were planning to commit public executions in Iraq and Syria.

Prime Minister Tony Abbott said, "The exhortations, quite direct exhortations, were coming from an Australian who is apparently quite senior in ISIS to networks of support back in Australia to conduct demonstration killings here in this country. So this is not just suspicion, this is intent and that's why the police and security agencies decided to act in the way they have."

Omarjan Azari, 22, appeared at the Central Local Court in Sydney accused of conspiring to commit an act to "shock, horrify and terrify" the public and was refused bail. Police say they believe the suspects were planning to conduct public beheadings after abducting a random member of the public and draping them in the ISIS flag. The Australian government last Friday raised its terrorism threat level from medium to high in response to what it said was a security threat posed by ISIS supporters.
Last Update: Sep 19, 2014 9:26 am
RELATED TOPICS