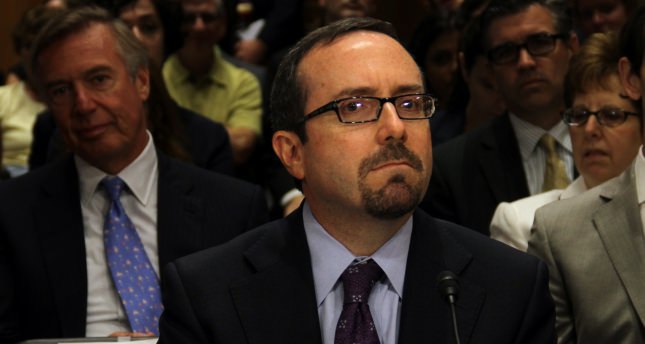 by Taha Meli Arvas Sep 19, 2014 12:00 am
THE U.S. Senate voted unanimously to confirm President Obama's nominee, John R. Bass, to the top-post at the U.S. Embassy in Ankara, Wednesday. Ambassador Bass is expected to arrive in Turkey this week as he takes his seat at an increasingly critical time.

The post has been left vacant for nearly three months as Republican Senators filibustered the nominations of scores of Ambassadors in retaliation for the Democrats' alteration to "minimum rule" on nomination confirmations. The United States is working closely with NATO-ally Turkey in holding off the advances of ISIS, a terrorist organization which has taken control of large swaths of Syria and Iraq amid power vacuums in both countries.

Ambassador Bass' first order of business will most likely be coordinating with the Turkish Government and the U.S. State Department in specifying the role Turkey will be taking in confronting ISIS. Turkey is in a seemingly difficult situation as ISIS continues to hold 50 hostages captured from the Turkish Consulate in Mosul. Turkey does not want to endanger the lives of its diplomats while it cannot continue to allow ISIS to advance unfettered against the citizens of Iraq, Syria, including border regions of Turkey. Bass has worked for both Republican and Democratic administrations in the State Department, serving as the ambassador to Georgia and most recently the executive secretary of the State Department. He is widely respected in diplomatic circles and has taken on another difficult assignment during a time of unprecedented armed conflict in the region.

A graduate of Syracuse University, home to the perennially top-ranked schools of public policy and citizenship, Bass' qualifications, previous posts, and experience working closely with Secretary of State Kerry, make him the ideal candidate for the Ambassadorship, evident by his unanimous confirmation by the U.S. Senate. Here's wishing Ambassador Bass the best of luck in his new post.