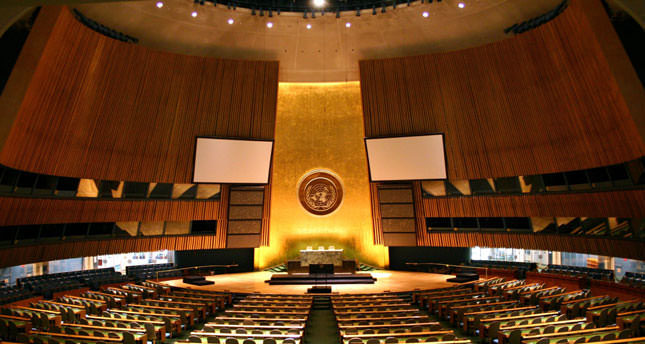 Despite widening viewpoints on climate issues, world leaders gathered at the one-day U.N. summit to take solid action against the threat of global warming. China pledges to cut emissions by nearly 50 percent by 2020

Hosted by the U.N. Secretary General Ban Ki-moon, the 2014 Climate Change Summit held on Tuesday was the largest ever gathering of world leaders on climate issues since talks in Copenhagen five years ago. Despite the historic meeting, due to the sharp difference in stance between countries on climate matters, a new global climate-change treaty that binds all countries into tackling climate change is still a long way off. Speaking at the U.N. summit, U.S. President Barack Obama called on world leaders for a more global approach to climate issues. "The U.S. has made ambitious investments in clean energy and ambitious reductions in our carbon emissions," he said. "Today I call on all countries to join us, not next year or the year after that, but right now. Because no nation can meet this global threat alone," he added.

The report stated that the U.S. would not release its new carbon emissions targets until early 2015. China, which is the world's biggest polluter thanks to explosive economic growth, has set its deadline to reduce its emissions per gross domestic product by 45 percent by 2020. Chinese Vice-Premier Zhang Gaoli said that China would make its economy much more carbon efficient by the deadline. This was the first time China pledged to take solid action on climate change over carbon emission.

Before the summit took place, the U.S., a non-member of Kyoto protocol, refused to join climate change aid for poor nations. In addition, Brazil refused to sign an anti-deforestation pledge. As the world leaders have set the first-ever deadline to end deforestation by 2030, Brazil's refusal of the deforestation goal has led to uncertainty over whether the pledge will be successful.

At the one-day meeting, deforestation, carbon pollution and methane leaks from oil and gas production were the central issues for discussing the effects of climate change. As food security is on the agenda of the climate conference, world leaders pledged commitments to ensure food security through transforming agricultural practices, in order to increase productivity while reducing carbon emissions. Underscoring the importance of food security and nutrition security, the U.N. Secretary-General Ban Ki-moon said, "I am glad to see action that will increase agricultural productivity, build resilience for farmers and reduce carbon emissions."

Amid growing warnings on the climate change and its effects, the report "Global Estimates 2014: People displaced by disasters" conducted by the Norwegian Refugee Council's Internal Displacement Monitoring Center (IDMC) shows that 22 million people were internally displaced in 2013 as a result of natural disasters. The numbers are three times higher than those who were internally displaced by conflict. The report also estimates that "the risk of displacement has doubled over the last 40 years." Taking climate change issue into consideration, the growth and concentration of urban populations, particularly in vulnerable countries, are seen as crucial factors that lead to displacement.

"This increasing trend will continue as more and more people live and work in hazard-prone areas. It is expected to be aggravated in the future by the impacts of climate change," said Jan Egeland, secretary-general of the Norwegian Refugee Council, at a conference at U.N. headquarters.

The Philippines, China and India are the countries with the largest populations of internally displaced people (IDP) caused by natural disasters. The worst affected by disaster induced displacement are Asian countries "where 19 million people, or 87.1 percent of the global total, were displaced." The devastating impact of natural disasters including floods, storms, earthquakes, volcanic eruptions and wildfires has created vulnerable populations.

A quite terrifying outbreak of political extremism around the world suggests that the number of IDP could grow even higher in 2014. A U.N.-backed report on world-wide conflict-induced displacement reveals that internal displacement caused by armed conflict, situations of generalized violence or violations of human rights is a worsening humanitarian crisis. Syria, Iraq, Columbia and Nigeria are the countries suffering most from conflict-induced displacement. The annual report "Global Overview 2014: People internally displaced by conflict and violence" released in May 2014 by the IDMC shows a staggering increase in global displacement worldwide with particular regard to the cases in the Middle East and sub-Saharan Africa.

According to IDP figures analysis of Syria, there are at least 6.5 million IDP living in Syria as of May 2014. The report shows that 30 percent of the total population has been internally displaced. The indicated number is likely to increase as the war in Syria has been escalating, severely affecting civilians' lives. The Syria Integrated Needs Assessments (SINA) reports a figure of 4.1 million IDP in 111 of 272 sub-districts countrywide.

Iraq has long been suffering from the volatility of its security situation. The IDMC estimates that at least 2.8 million Iraqis were internally displaced as of Sept. 8, 2014. According to their figures, from Dec. 2013 to Aug. 2014 1.7 million Iraqis have been displaced due to the growing conflict in the country.

Apart from the Middle East, Colombia in South America is one of the countries with the largest populations of IDP worldwide. The country suffers from an increasing number of IDP due to internal armed conflict and violence stretching back over five decades. It is estimated that 5.7 million people have been internally displaced. Ethnic minorities, such as Afro-Colombians and indigenous groups comprise a significant number of all IDP. The violent conflict between armed groups and the Columbian national army poses significant threats to individuals and communities while causing mass displacements. Widespread human rights abuses and violence force many Columbians to flee their country.

The IDP figure analysis of Nigeria indicates that there are 3.3 million IDP there. The government-led counterinsurgency operations in northeastern Nigeria against violent attacks by the militant group Boko Haram has prompted fears while forcing many to relocate.

The IDMC's IDP figures analysis for Palestine shows that 339,600 people were displaced in the Gaza Strip during the Israeli military's Protective Edge operation that was launched on July 8. Since the start of Israel's occupation in 1967, the figures show that the total number of IDP in the Gaza Strip and the rest of Palestine have reached 497,000. Due to the eight-year-long Gaza siege and largely closed borders, the internally displaced Palestinians cannot move to any other place, except Gaza or seek safety in neighboring countries. Nearly 25 percent of Gaza's 1.8 million people have been forcibly displaced within the small territory.