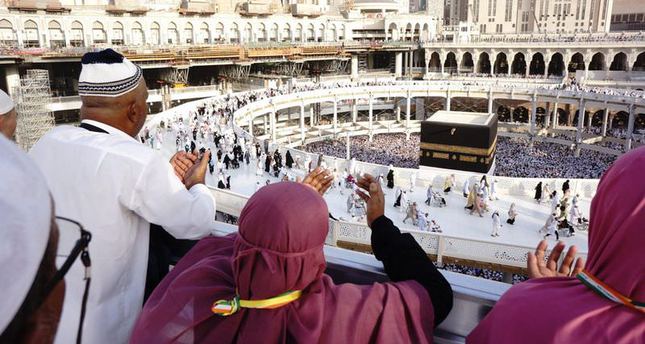 by Daily Sabah with AA Sep 25, 2014 12:00 am
Muslim pilgrims are converging on Saudi Arabia for the annual hajj, the world's one of the largest gatherings. The week of Hajj occurs during the last month of the Islamic calendar and this year's pilgrimage is expected to begin on 3 October with close to two million believers who will congregate to follow the 1,400-year-old tradition of Islam's Prophet Mohammed.

Every year, believers from about 160 countries converge on the Islamic city of Mecca to complete the holy journey which is considered one of the Muslim faith's greatest acts of worships. It is among the five pillars of Islam and all capable Muslims must perform the hajj at least once, the high point of their religious life.

While the pilgrims are united by a common religious bond, this year's hajj comes with Muslim nations drawn together by widespread revulsion toward the militants of ISIS, who call themselves Muslims. Saudi Arabia and four other Arab states have joined Washington in launching air strikes in Syria against the militants, who have declared a "caliphate" straddling Iraq and Syria and committed brutal atrocities. Saudi Foreign Minister Prince Saud al-Faisal has branded ISIS "evil" and said the militants have distorted the image of Islam and Muslims.

Oil-rich Saudi Arabia is home to Islam's holiest sites, where it is waging a different kind of battle to protect pilgrims from two deadly viruses, Ebola and Middle East Respiratory Syndrome coronavirus (MERS-CoV).

The deadliest Ebola epidemic on record has infected more than 6,200 people in west Africa and killed nearly half of them, according to the World Health Organisation (WHO). Saudi Arabia is the country hardest hit by MERS, which last weekend claimed the life of a 27-year-old Saudi man in Taif, about 80 kilometres (50 miles) east of Mecca. This brought the number of MERS deaths in Saudi Arabia to 317 since the virus first appeared in September 2012.

Marred by stampedes, fires and other deadly incidents in the past, the hajj has in recent years been almost incident-free thanks to multi-billion-dollar safety projects by the authorities. Saudi media said 85,000 security and civil defence officers will be on duty for the hajj, which lasts five days.