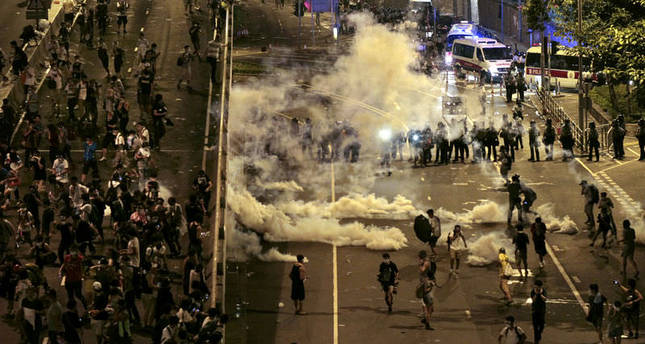 Thousands of demonstrators are blocking a central business district Monday at the heart of Hong Kong as protests by the Occupy Central with Love and Peace (OCLP) movement continue for a second day.

Hong Kong democracy protesters defied on Sunday volleys of tear gas and police baton-charges to stand firm in the centre of the global financial hub in one of the biggest political challenges for Beijing since the Tiananmen Square crackdown 25 years ago.

The territory's chief executive Leung Chun-ying has appealed to the protesters to leave Harcourt Road, while fears build that the Chinese army might intervene.

The government said in a website statement Monday that police had now moved from the area "after road-blocking citizens had mostly calmed down."

"I hope the public will keep calm. Don't be misled by the rumors," said Leung. "Police will strive to maintain social order, including ensuring smooth traffic and ensuring the public safety.

The OCLP is calling on China's central government to cease what it sees as interference in Hong Kong politics, demanding that the Chinese mainland allow the island - an autonomous region on the southern coast of China - to choose its own leaders.

In August, Chinese leaders ruled that while Hong Kongers could choose their next leader, or chief executive, in elections set for 2017, they could only elect someone from candidates vetoed by Beijing.

In a statement Monday, the protest movement called on Leung to resign and said his "non-response to the people's demands has driven Hong Kong into a crisis of disorder."

It added that Occupy Central is now "a spontaneous movement" of all Hong Kong people.

"Anyone with a conscience should be ashamed to be associated with a government that is so indifferent to public opinion. We urge all Executive Councilors and government officials under the accountability system, and who have a conscience, to resign from their positions and to stand with the people," the statement read.

The Chinese Foreign Ministry, on the other hand, said on Monday that China opposes any external force supporting "illegal movements" such as Occupy Central.