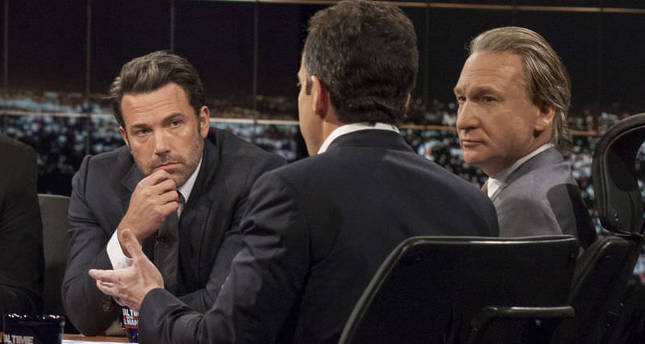 by Daily Sabah with Agencies Oct 06, 2014 12:00 am
A prominent American actor Ben Affleck, has launched a defense of Islam on a US talk show.

Attending 'Real Time With Bill Maher' to promote his new film, Affleck got caught up in a heated argument on Islam and objected to the 'racist' opinions of the TV host, Sam Harris.

He castigated the opinions of Harris, a famous atheist, saying his remarks were 'racist' and 'gross'. As Harris delivered his critical remarks on Islam, which argued that a large number of Muslims support the beliefs of jihadists, Affleck cut in to defend the religion.

Harris said Islam was "the mother lode of bad ideas."

"That's an ugly thing to say" Affleck said, in response to Harris's remark.

"It's gross, it's racist. It's like saying 'that shifty Jew'" Affleck also said during the show, referring to Harris's harsh remarks on Islam.