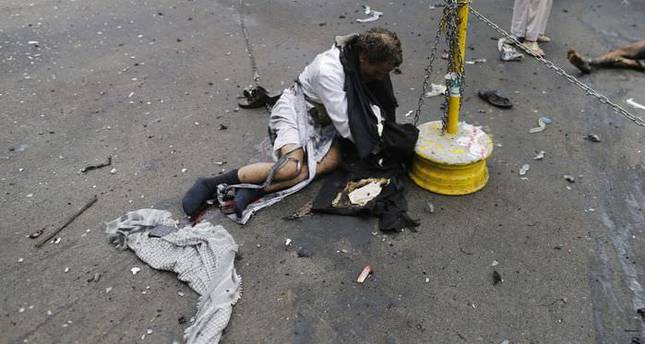 by Oct 09, 2014 12:00 am
A suicide bomber killed at least 50 people on Thursday when he detonated an explosives-laden belt in a district of the Yemeni capital where the powerful Shi'ite Muslim Houthi movement had planned to hold a rally, medics and witnesses said.

A Reuters witness in Sanaa counted at least 20 bodies immediately after the attack on a checkpoint held by the Houthis, the country's main power brokers since their paramilitary forces seized the capital on Sept. 21 following weeks of anti-government demonstrations.

Medical sources later said the death toll had risen to at least 50, including several children. The death toll was expected to climb further, with many of those wounded in serious or critical condition, they said.

In a separate incident, at least 20 government soldiers were killed in a suicide car bombing and gun attack in the country's east on Thursday, state news agency SABA reported.

The attacks occurred just hours after a political showdown between the Houthis and President Abd-Rabbu Mansour led to the resignation of Prime Minister Ahmed Awad bin Mubarak, whose appointment on Tuesday had angered Houthi leaders.

"He then exploded amidst the (Houthi) security and ordinary people nearby," the policemen told Reuters.

In Buroom, a coastal region of the eastern Hadramout province, a suicide bomber drove a car laden with explosives towards an army camp, while gunmen tried to storm the facility, a local official and witnesses said. The soldiers beat back the attackers, but SABA said 20 of the troops were killed.

No one has claimed responsibility for the attacks, but the incidents appear to mirror previous bombings carried out by Al Qaeda in the Arabian Peninsula (AQAP), which has targeted state institutions, including the armed forces, and which sees members of the minority Zaydi sect of Shi'ite Islam as heretics.

Western and Gulf Arab countries are worried that instability in Yemen could strengthen al Qaeda and have supported a U.N.-backed political transition since 2012 led by Hadi meant to shepherd the country to stability after decades of autocracy.