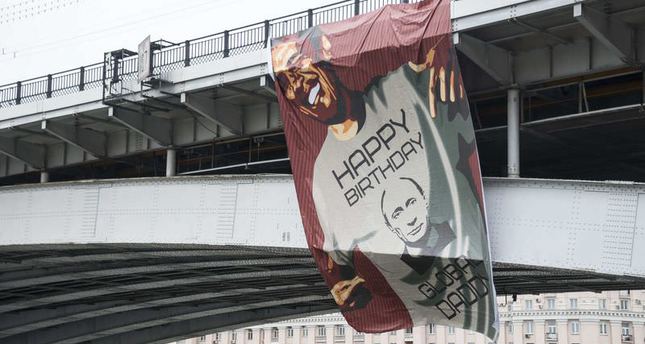 by Oct 09, 2014 12:00 am
For a man who has hugged a polar bear, flown with migrating cranes and shot a tiger with a tranquiliser gun, Vladimir Putin celebrated his 62nd birthday unusually quietly on Tuesday. For the first time in years, the Russian president took the day off on his birthday and retreated to the remote forested taiga in Siberia for a private celebration.

With the economy faltering under sanctions imposed over the Ukraine crisis, the rouble in decline and relations with the West in disarray, he may have deemed festivities inappropriate.

If so, his admirers did not get the message. Or perhaps, after reclaiming the Crimean peninsula from Ukraine this year, he no longer has to resort to macho stunts to please them.

Supporters turned to art, song and humour to honour a man some of them regard as little less than Russia's saviour, managing to drown out the growing grumbles about the economy and the political and economic cost of the conflict in Ukraine.

"His life is like a hundred milestones crucial for our country," the children, part of a singing group called HITryushki, sang in a school classroom with a map of Russia on the wall. At one point, footage shot from above showed the children standing in the form of a heart.

One fan honoured Putin by staging a small exhibition in Moscow on Monday depicting him as the Greek mythological hero Hercules carrying out his legendary 12 labours - updated to show the president fighting modern problems such as terrorism.

A humorous banner was unfurled from a Moscow bridge showing U.S. President Barack Obama wearing a T-shirt wishing Putin a happy birthday. Across town, Russians were snapping up T-shirts with Putin's portrait newly on sale in the exclusive GUM department store opposite the Kremlin on Red Square.