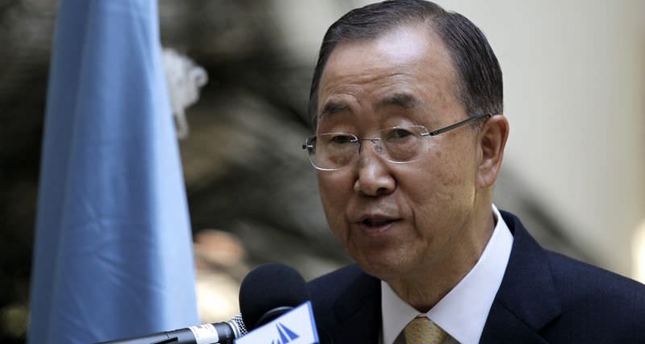 by Daily Sabah with Agencies Oct 12, 2014 12:00 am
Amid efforts to rebuild Gaza despite the ongoing blockade, Pierre Kraehenbühl, the near east chief of the UNRWA for Palestinian refugees, called the Israeli embargo on the Gaza strip "illegal," urging Israel to lift the Gaza blockade.

Hundreds of millions of dollars was pledged to the war-stricken Gaza strip in an international donors' conference chaired by Egypt and Norway in Cairo, with the aim of rebuilding the collapsed city after the devastating 50-day war. As Gazans struggle to heal their wounds, rebuild their city and go back to their daily life, the Gaza reconstruction conference held on Sunday aimed to mobilize efforts for the rebuilding of the embattled Gaza Strip.

About 30 foreign ministers and representatives of 20 regional and international organizations, including the International Monetary Fund and the World Bank, participated in the one-day conference. U.N. Secretary-General Ban Ki-moon and Arab League Secretary-General Nabil al-Arabi were among those who took part in the conference. During the conference, Qatar pledged $1 billion (TL 2.29 billion) for the Gaza reconstruction. France offered 30 million euros (TL 86.58 million) until 2017. The United States State Secretary John Kerry announced $212 million in U.S. aid for the Gaza reconstruction. "Out of this conference must come not just money but a renewed commitment from everybody to work for peace that meets the aspirations of all, for Israelis, for Palestinians for all people of this region. And I promise you the full commitment of President Obama, myself and the United States to try to do that," Kerry said during the conference.

Palestinian President Mahmoud Abbas promised a transparent and responsible use of funds pledged at the conference while stating that $4 billion was needed to reconstruct the coastal strip. "The [Palestinian] government will carry out the reconstruction plan with full responsibility and transparency in coordination with the U.N., the donors, international financial institutions, civil society and the private sector," Abbas said at the conference.

Meanwhile, Egyptian President Abdel-Fattah el-Sissi urged Israel to reach a peace deal with the Palestinians. "I call on the Israeli people and the government: now is the time to end the conflict," the Egyptian President said in his opening remarks.

During Israel's deadly assault on Gaza, tens of thousands of Palestinians faced a deteriorating humanitarian situation. The Israeli military offensive caused many Palestinians to seek refuge in safer areas. Apart from the death toll, at least 425,000 displaced people in the Gaza Strip are in emergency shelters, according to the United Nations and nearly 12,000 homes were destroyed or partially damaged during Israeli raids.