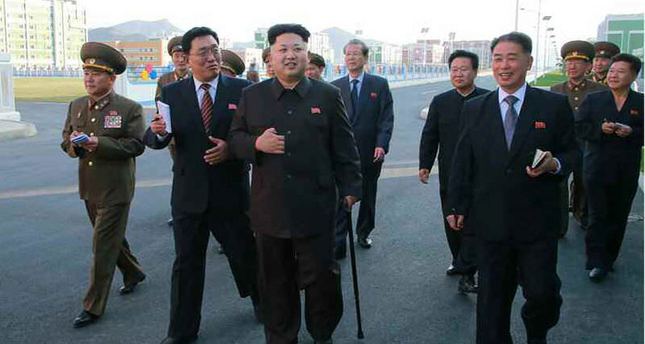 by Associated Press Oct 14, 2014 12:00 am
North Korean Leader Kim Jong Un made his first public appearance in five weeks on Tuesday, the country's official news agency reported, ending a prolonged absence that fueled speculation about his health and control over the country.

Kim had last been seen in the state media five week ago at a Sept. 3 concert, and he missed several high-profile events that he normally attends. An official documentary released late last month then made a single reference to Kim's "discomfort" and showed video footage from August of him overweight and limping.

The KCNA report Tuesday made no mention of Kim's health, only detailing his comments about the construction projects. At the tour of the residential district, Kim praised the North's scientists as "patriots who are devoting all their lives to building a rich and powerful nation, convinced that though there is no frontier in science, they have a socialist motherland and are under the care of the mother party."

Many analysts believe that while Kim may have some health issues, he's probably not in serious trouble. But many other people wonder.

At a South Korean parliamentary hearing Monday, Choi Yoon-hee, head of the Joint Chiefs of Staff, said Kim's health problems "are not severe enough to disrupt his status as the ruler of the country."

There are many reasons to believe that.

No unusual troop movements or other signs of a possible coup emerged during his absence. Diplomacy at the highest level continues: Three members of his inner circle made a surprise visit to the South, something analysts say would be impossible without the leader's blessing. Foreign tourists and aid workers still travel to the North, and there have been no reports of new restrictions or warnings for diplomats.

There's also nothing particularly unusual about North Korean leaders laying low for extended periods. Kim's late father, Kim Jong Il, no fan of the limelight in his later years, would disappear at times; Kim Jong Un, who seems to genuinely like being at the center of things, took off without a word for three weeks in 2012.

But the apparent vanishing act of a man long seen in foreign media as a cartoonish, all-powerful overlord sitting on a nuclear arsenal while his people starve proved endlessly fascinating. And while there is plenty of informed analysis from experts and frequent visitors to Pyongyang, there seems to be even more thinly sourced speculation.

Kim is, by turns, reported to be suffering from gout, from diabetes, from a brain hemorrhage, from a heart ailment, from a leg injury that required surgery from a French doctor, from mental illness or, according to a head-turning British report, from a cheese addiction.

Kim Jong Un emerged as the anointed successor after Kim Jong Il disappeared from public view in 2008 by most accounts because of a stroke. The elder Kim died in late 2011.
Last Update: Oct 14, 2014 10:34 am
RELATED TOPICS