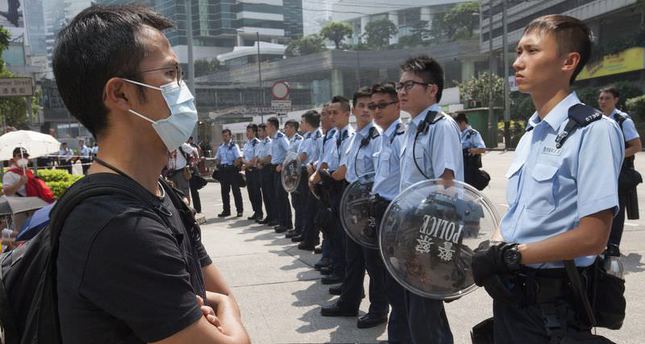 by Oct 15, 2014 12:00 am
Hong Kong police came under fire Wednesday after plainclothes officers were filmed beating and kicking a handcuffed protester during some of the worst clashes since mass democracy rallies erupted two weeks ago.

The city's security chief said the accused officers had been "removed" from their posts after the assault that occurred amid violent confrontations when police swooped in to clear newly erected barricades near government headquarters.

Tensions have spiked in recent days as police began raiding protest sites and tearing down barricades, after more than a fortnight of disruptive mass rallies calling for free elections in the former British colony.

Demonstrators and police fought running battles overnight, with officers using their fists, batons and pepper spray to beat back crowds in an operation they defended as a necessary response to ensure public order.

But footage from television network TVB later emerged of a group of plainclothes officers assaulting a handcuffed and unarmed protester, sparked outrage and calls for prosecution from activists and lawmakers.

It shows six plainclothes officers hauling the man to a dark corner of a public park, and placing him on the ground.

One officer stands over the man and punches him, as three others are seen repeatedly kicking him in an assault TVB said lasted four minutes.
Prominent student leader Joshua Wong said trust between police and activists has now ebbed to an all-time low.

"The proper action police should take is to bring the protester to the police car, not to take him away and then punch and kick him for four minutes," he told reporters.

Police have previously been criticised for firing tear gas on umbrella-wielding protesters on September 28 in a move that riveted the world's attention.

Demonstrators have also accused them of failing to come to their aid during frequent attacks from violent pro-government thugs.

Hong Kong's security chief sought to douse tensions over the video, expressing "concern" and promising a "just and fair investigation".

"The policemen who are involved in the incident have been removed from their current working positions," Secretary for Security Lai Tung-kwok said without specifying how many officers were being probed.

Huge crowds have intermittently rallied against China's insistence that it will vet candidates standing for election as the semi-autonomous city's next leader in 2017 -- a move protesters have labelled as "fake democracy".

While the activists have been praised for their civility and organisational skills, they have also brought widespread disruption to an already densely populated city.

In intense scenes overnight, a wall of police armed with shields and batons marched before dawn on crowds who had erected new barricades in a road tunnel next to the headquarters of the city's embattled government.

Clutching the umbrellas that have become emblematic of their fight for full democracy, some protesters were pulled to the ground, handcuffed and hauled away by officers.

Police said that 45 people were arrested in the operation, including 37 men and eight women. Four officers were also injured.
Within an hour police had regained control of the road.

The violence was among the worst seen since the start of rallies that have drawn huge crowds calling for Beijing to grant the semi-autonomous city the right to hold free elections.

A police statement said officers had warned that "advancing against police cordon line even with their arms raised is not a peaceful act", and had appealed to the demonstrators to "stay calm and restrained".

Ben Ng, an 18-year-old student, was with protesters near a newly built barricade when the baton-wielding contingent approached.

"Police used pepper spray without any threat or warning. Protesters were beaten by police," he said. "Both protesters and police, their emotions are very unstable."

The protests that have paralysed parts of the city over the last fortnight have largely been peaceful. But ugly scuffles have frequently broken out between demonstrators and government loyalists, sparking accusations the authorities are using hired thugs.

Patience is running short in some quarters, with shop owners and taxi drivers losing business and commuters voicing irritation at extensive disruptions on the roads and on public transport.

Direct confrontation with police has been much less common.

But in the last two days, officers have begun moving in to remove barricades on the edges of protest sites in the city, shrinking their footprint and opening some roads to traffic, while allowing the bulk of demonstrators to stay in place.