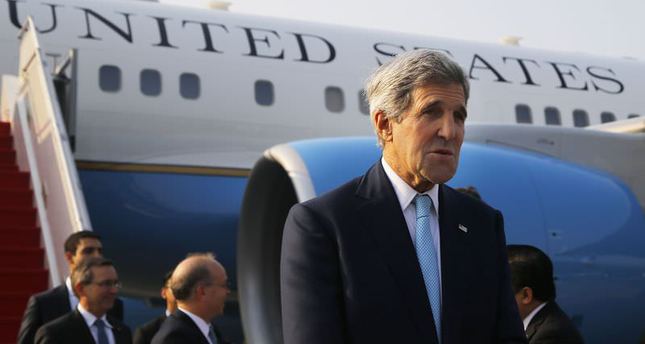 The U.S. told Turkey that a U.S. military air-drop of arms to Syrian Kurds battling ISIS near the Syrian town of Kobani was a response to a crisis situation and did not represent a change in the country's policy, U.S. Secretary of State John Kerry said on Monday.

"We talked with Turkish authorities - I did, the president did, to make it very very clear that this is not a shift in policy by the United States. It is crisis moment, an emergency," Kerry told reporters on a visit to Indonesia, adding that it was a "momentary effort."

Kerry said that it would be "irresponsible" and "morally very difficult" not to support Kurds fighting ISIS.

Kerry told reporters that they understood Turkey's concerns about supplying the Kurds, who are linked to PKK. But, he said the situation is such in the besieged town of Kobani that the resupplies were deemed absolutely necessary in a "crisis moment."

"Let me say very respectfully to our allies the Turks that we understand fully the fundamentals of their opposition and ours to any kind of terrorist group and particularly obviously the challenges they face with respect the PKK," Kerry said. "But we have undertaken a coalition effort to degrade and destroy ISIS, and ISIS is presenting itself in major numbers in this place called Kobani."

The long-simmering conflict between Turkey and the PKK has killed tens of thousands of people since 1984. Turkey and its U.S. and European allies consider the PKK a terrorist organization.

The U.S. military said on Sunday it had airdropped weapons, ammunition and medical supplies to Kurdish forces defending the Syrian city of Kobani against ISIS militants.

The airdrops were the first of their kind and followed weeks of U.S. and coalition airstrikes in and near Kobani, not far from the Turkish border. The U.S. said earlier in the day that it had launched 11 airstrikes overnight in the area. Central Command said its forces have conducted more than 135 airstrikes against ISIS forces in Kobani.

The airdrops are intended to be temporary and that the U.S. has asked Turkey to allow Kurdish fighters from Iraq into Kobani to help, Kerry said.

Turkey's Foreign Minister said Monday that his country is helping Iraqi Kurdish forces cross into Kobani "to give support" to fellow Kurdish fighters defending the Syrian town against ISIS militants.

The comments by Mevlüt Çavuşoğlu at a news conference in Ankara followed the announcement by the U.S. military that it had airdropped supplies to the Kurdish forces in Kobani.

One official said that while the results of the mission were still being assessed, it appeared that "the vast majority" of the supplies reached the intended Kurdish fighters. That official also said the C-130s encountered no resistance from the ground in Syria during their flights in and out of Syrian airspace. The officials spoke on condition of anonymity under ground rules set by the White House.

One of the administration officials said the airdrops should be seen as a humanitarian move. He said U.S. officials believe that if Kobani were to fall, the ISIS militants would massacre Kurds in the town.