Nigeria proves Ebola can be contained 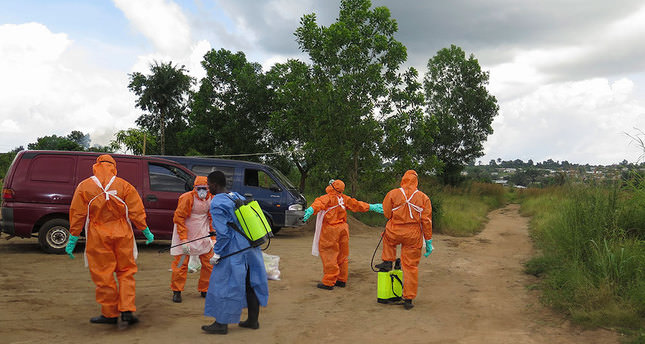 by Oct 21, 2014 12:00 am
Nigeria was declared Ebola-free on Monday in a "spectacular success" in the battle to contain the spread of a virus which is devastating Guinea, Sierra Leone and Liberia where more than 4,500 people have died.

The World Health Organization said Nigeria -- Africa's most populous country where eight deaths had sparked fears of a rapid spread through its teeming cities -- had shown the world "that Ebola can be contained".

Another west African nation, Senegal, was declared free of the virus on Friday.

European Union foreign ministers meeting in Luxembourg said the bloc must step up efforts to contain Ebola and prevent it becoming a global threat.

Amid concerns that the global response has been too slow, the 28 EU nations boosted their funding to around 500 million euros ($600 million) and pledged to do more to get foreign medical staff onto the Ebola frontline.

They also agreed to appoint a coordinator to oversee the response to the virus.

"My colleagues all agree that the idea of an Ebola coordinator is a good one," French Foreign Minister Laurent Fabius said.

"The person will be named in the coming days."

In the United States, the absence of any new cases in the last five days prompted cautious optimism from health authorities that the virus has been contained there after a flawed initial response.

It was also announced on Monday that an anonymous patient, being treated at a facility in Georgia, had recovered and been released from hospital.

And a Norwegian woman who contracted the virus while working for Doctors Without Borders in Sierra Leone has been cured after treatment in Oslo, the health charity said.

In another encouraging step, test results showed a Spanish nurse who was the first person to contract the virus outside Africa appears to now be clear of the disease after receiving treatment.

But while the rest of the world appeared to be winning the fight to keep Ebola at bay, the three west African countries which account for the vast majority of the deaths -- Liberia, Sierra Leone and Guinea -- were counting a rising human and economic cost.

The UN said a third member of its staff had died of the disease.

Edmond Bangura-Sesay, a driver for the UN Women agency in Sierra Leone, had been quarantined on October 14 after his wife fell ill.

She is receiving treatment for the virus and a UN team was trying to trace everyone who had contact with him.

Liberian President Ellen Johnson Sirleaf warned Sunday that a generation of Africans was at risk of "being lost to economic catastrophe" because of the crisis.

"This fight requires a commitment from every nation that has the capacity to help -- whether that is with emergency funds, medical supplies or clinical expertise," she said in an open letter.

The WHO declared Nigeria free of Ebola after 42 days passed without any new cases of the haemorrhagic fever among its 170 million citizens.

"The virus is gone for now. The outbreak in Nigeria has been defeated," the WHO's representative in Nigeria, Rui Gama Vaz, said.

"This is a spectacular success story that shows to the world that Ebola can be contained."

They said that should include the option of medical evacuation to ensure staff working in the worst-hit countries receive the best care should they fall ill themselves.

That has been a key stumbling block in trying to boost the number of foreign medical workers prepared to work in Guinea, Liberia and Sierra Leone.

The ministers also called on the international community to meet the $1.0 billion (782 million euros) sought by the UN.

British Prime Minister David Cameron pressed his EU colleagues to double their own contribution to one billion euros.

About 100 more people, most of them health care workers, are being tracked in Texas after coming in contact with the first patient diagnosed in the United States in late September.

Still, officials said it was reassuring that no new infections had emerged in recent days.

Latin America has so far been spared Ebola, but the leaders of 12 countries there and in the Caribbean pledged to tighten border checks to stop it spreading to the region.

At a conference in Havana, they agreed to increase checks at ports and airports and draft a regional action plan by November 5.

Cuba has sought to place itself at the forefront of the international response to the epidemic, sending 165 doctors and nurses to west Africa with another 300 on the way.

The contribution brought rare praise for Cuba from US Secretary of State John Kerry.