Ben Bradlee, who guided the Watergate coverage, dies at 93 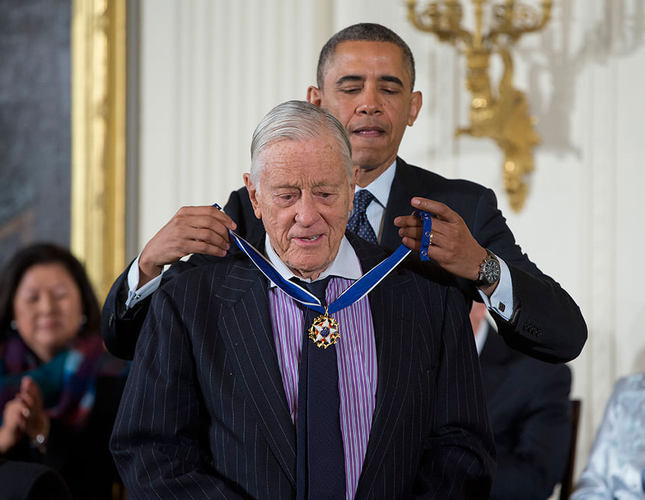 by reuters
Oct 22, 2014 12:00 am
Benjamin C. Bradlee, the hard-driving editor who reigned over the Washington Post with the style of a well-dressed swashbuckler and the profane vocabulary of a dockworker as the newspaper helped topple President Richard Nixon, died on Tuesday aged 93.

Bradlee's death at his Washington home of natural causes was announced by the Post, which reported late last month that he had begun hospice care after suffering from Alzheimer's disease for several years.

As executive editor from 1968 until 1991, Bradlee became one of the most important figures in Washington, as well as part of journalism history, while transforming the Post from a staid morning daily into one of the most dynamic and respected publications in the United States.

Bradlee's work guiding young reporters Bob Woodward and Carl Bernstein as they traced a 1972 burglary at Democratic Party headquarters at the Watergate office and apartment complex back to the Nixon White House has been celebrated from journalism schools to Hollywood.

The Post won a Pulitzer Prize for its coverage of the Watergate scandal, which forced Nixon to quit under threat of impeachment in August 1974.

Bradlee gave Woodward and Bernstein license to pursue the scandal and its cover-up vigorously, approving their use of the unidentified "Deep Throat" source, and the newspaper published about 400 articles about Watergate over 28 months.

The Post's coverage -- along with the book and movie about it, "All the President's Men" -- inspired a generation of investigative reporters.

"I think the great lesson of Watergate was probably the stick-tuitiveness of the Post," Bradlee once told the American Journalism Review. "The fact that we hunkered down and backed the right horse. I think that was a wonderful lesson for publishers, too."

Upsetting presidents was a Bradlee stock-in-trade. In 1972 the Post joined the New York Times in publishing stories based on the Pentagon Papers, a secret government account of Vietnam War decisions, despite heavy legal pressure. The Post also uncovered details of the Iran-Contra scandal that rocked Ronald Reagan's White House.

"I think this shows the (adversarial free-press) system works," Bradlee said. "It's a wonderful control on governments that are not all that careful on policing themselves."

Bradlee did have a close friendship with one president, John F. Kennedy, who had been his neighbor in Washington's Georgetown district when Bradlee was a Newsweek correspondent. In 1975 he wrote a book titled "Conversations With Kennedy."

Bradlee said he never knew about such Kennedy peccadilloes as an affair the president had with Judith Exner, a woman said to have had organized crime connections. Bradlee said later that if he had found out, he would have been forced to expose that liaison and probably destroy his friendship with Kennedy.

Woodward once described Bradlee as "Kirk Douglas as a submarine commander." Always nattily and expensively dressed, he cut a dashing figure in the Post newsroom, where he held sway with a fiery and brusque demeanor, sharp wit and swagger.

Bernstein told CNN that Bradlee was, "the most galvanizing, remarkable figure to work with and for. You know those are kinds of clichés that people use, except this time it's really the case."
"His life was really about the truth," Bernstein added.

Bradlee also was known for his blunt way of expressing himself.
"One of the first things you notice about Ben, both the written and in-person Ben, is his vocabulary, his vernacular, his penchant for one-liners and salty phrases," Jeff Himmelman wrote in his biography, "Yours in Truth." "Swearing with Ben makes you feel like you're part of his club, the club that doesn't take anything too seriously."

Bradlee also was a fixture on the Washington social circuit with his third wife, former Post reporter Sally Quinn, who was 20 years younger.

Benjamin Crowninshield Bradlee was born in Boston on Aug. 26, 1921, to an aristocratic family. He attended Harvard and served on a Navy destroyer in the Pacific during World War Two before starting a New Hampshire newspaper in 1946.

His career at the Washington Post began in 1948 as a police reporter. He quit to become a press attache at the U.S. Embassy in Paris, then Newsweek magazine's Paris correspondent and its Washington bureau chief.

He returned to the Post, was named managing editor in 1965 and became executive editor in 1968, holding the job until his 1991 retirement.

When the Watergate burglary occurred and was dismissed by the White House as trivial, Bradlee was skeptical of the investigative efforts of Woodward and Bernstein. But once he sensed they were onto something big -- that the burglars were employed by Nixon's presidential re-election committee -- he urged them on.

Post publisher Katharine Graham had backed Bradlee when the Nixon administration tried to stifle publication of the Pentagon Papers and supported him again as he pushed Woodward and Bernstein deeper into Watergate. Their work reshaped American journalism.

"It is wonderfully ironical that a man who so disliked -- and never understood -- the press did so much to further the reputation of the press, and particularly the Washington Post," Bradlee wrote in the forward of his memoir, "A Good Life." "In his darkest hour, he gave the press its finest hour."

Woodward, Bernstein and Bradlee were the only people at the Post to know the identity of Deep Throat, the source who revealed key secrets of the Nixon Watergate cover-up to the Post in clandestine meetings.

Mark Felt, a former No. 2 official at the FBI, revealed in 2005 he was Deep Throat, but Bradlee said he did not ask his reporters about the source's identity until after Nixon had resigned.

Actor Jason Robards won an Academy Award for his portrayal of Bradlee in "All the President's Men," the film treatment of Woodward and Bernstein's first Watergate chronicle.

Bradlee also was in charge of the Post when it suffered a major embarrassment. In 1981, the newspaper returned a Pulitzer won by Janet Cooke after it turned out the reporter's story about an eight-year-old drug addict was a fabrication.

Under Bradlee, the Post doubled its editorial staff to 600, increased its news budget from $3 million to $60 million and boosted its circulation from 446,000 to 802,000 readers.

"A true newspaperman, he transformed the Washington Post into one of the country's finest newspapers, and with him at the helm, a growing army of reporters published the Pentagon Papers, exposed Watergate, and told stories that needed to be told – stories that helped us understand our world and one another a little bit better," Obama said in a statement.

Bradlee was married three times, most recently in 1978 to Sally Quinn, then the Post's top features writer. He had one son, Benjamin, by his first marriage; a son and daughter, Dominic and Marina, by his second; and a son, Quinn, by his third.