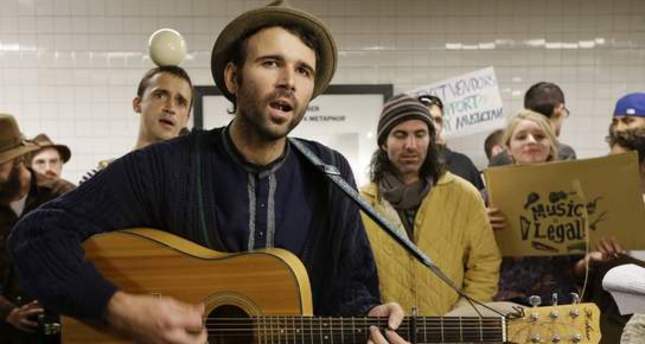 by Associated Press Oct 22, 2014 12:00 am
The NYPD recently arrested a local musician for loitering while playing the guitar in a New York subway station.

The incident was recorded and uploaded to YouTube on Friday. The video shows Andrew Kalleen being confronted by an unidentified police officer who orders him to pack up his guitar and leave the subway station.

Musicians rallied around a fellow subway performer whose arrest in a busy station came after a confrontation over whether he needed a permit and was captured on video as commuters jeered police.

The New York Police Department said it's looking into the arrest of Andrew Kalleen.

Kalleen was performing Friday at the G train stop in Brooklyn's hipster Williamsburg neighborhood, home to trendy boutiques and cafes patronized by ultrahip residents and tourists who flock there to experience Brooklyn life. A police officer told Kalleen he had to leave the station because he needed a permit to play there.

"I'm not going to argue with you," the officer says calmly in the video.

Kalleen, also speaking evenly, refuses to leave and tells the officer he has a right to be there performing, then directs him to the section in the Metropolitan Transportation Authority's rules of conduct that says artistic performances and solicitations of donations are allowed.

The flustered officer reads the section aloud, as the watching straphangers clap, but then decides to eject Kalleen from the station.

The MTA does not issue permits, and the rules the officer read aloud are accurate. But the MTA rules differ from state law, which says an entertainer can be arrested for loitering in a transportation facility unless he was authorized to be there.

"Get your stuff. You're leaving," the officer says.

Kalleen again refuses and begins to play Pink Floyd's "Wish You Were Here."

The officer calls for backup while removing a guitar from the shoulders of Kalleen, who continues to sing a cappella.

"I'm being oppressed," says the musician, wearing hot pink socks, no shoes, a jacket, a tie and a fedora.

Meanwhile, straphangers taunt the officer and then begin to insult him and ask whether there are more serious crimes he should be policing.

Kalleen was arrested on a charge of loitering as he sang Neil Young's protest anthem "Ohio." Police spokesman Steve Davis said Tuesday that the department is investigating the matter.

The video was posted online and has been viewed more than 450,000 times.

On Tuesday afternoon, Kalleen and a group of other musicians and supporters including two City Council members held a musical rally at the subway station before he filed a complaint.

"It's important to stand up for your rights," Kalleen said. "If I'm not doing anything illegal, we are on equal playing fields, so he has no right to tell me what to do, so I will do as I please."

Matthew Christian, of the BUSK-NY advocacy group, called for police officers to get better training to understand musicians don't need permits to perform.

Kalleen has a court date scheduled for Friday.